I am a sci-fi junky and love urban fantasy. R.G. Alexander  (who’s an evil darling BTW) has completely sucked me into her Fireborne Series. I am Team Aziza (ha!) I just read book two, Make Me Burn (LOVED It) and R.G. has just turned up the heat for her readers and her heroine. The stakes get deeper, the flames get higher and our girl Aziza burns bright. (Like my adjectives? 😛 )

Enjoy our silly chat about how R.G. writes (with a blanket 🙂 ) about what Teams are, about cupcakes and Bone Daddy and evil sticks <g> then run, don’t walk and go get the Fireborne series if you’ve missed it AND make sure you enter my giveaway for a chance to win Make Me Burn.

PS. Click HERE for my review of Make Me Burn. 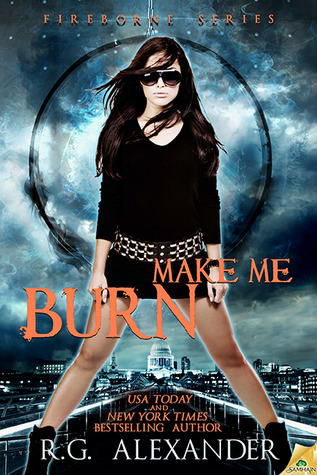 One wrong step and it could all go up in flames…

Aziza Jane Stewart is the last of the Fireborne, and so far it’s been nothing but a curse, destroying her family and putting everyone she loves in danger. Now she’s on a quest to find her brother’s portion of the power that flows in her veins and track down the murdering Jiniyr who still threaten her loved ones.

She and her Enforcer lover Brandon are officially “in a relationship”, but she’s still torn between two men who both set her on fire. Brandon’s duties are driving a wedge between them, and her need to protect her Jinn guardian isn’t helping. Exiled and stripped of his powers, Ram is focused on satisfying his darkest urges…and tempting her to come along for the ride.

When Aziza discovers Brandon has been keeping news of ritualistic murders from her and the evidence is pointing at Ram, all bets are off. It’s time to find her own answers, embrace what’s inside her and make her own rules, damn the consequences.

WARNING:Explicit content, even more danger and heavy drinking than book one, fetish clubs and role-play, whips and chains, voyeurism, exhibitionism, as well as more inappropriate use of supernatural powers for deviant activities… Burning down the house.

♥ Buy this ebook from: Samhain| Amazon | Barnes & Noble | ARe

Burn With Me bk 1

Burn Me Down bk 3

What: I’m giving away a kindle copy of

Cause I loved it 🙂

Who: a lucky duck commenter

How: Use the rafflecopter and leave us a comment telling us…

If you’ve read the books… what team are you?

we were in our pajamas for this video chat, and I’m nosy (!)