Oh! Too much fun! Dorothy Shaw and T.D. Hoffman are darlings and I had a blast chatting with them about bowling, writing smexy and listening to them read a delicious excerpt from their novella Spare Hearts. Come join the fun and add Spare Hearts to your list!

Stuck in this dead-beat town for too long, Candy Jameson is itching for some action. And the magnetically sexy, Sterling Dey might just be her chance to get back in the game . . . at least for a night. Soon the sparks flying between Candy and Sterling ignite into a fiery encounter that scorches the lanes. But when Sterling wants more than just one night with Candy, she’s not sure she’s ready to bet her heart on a one-night stand. Former professional bowling champion Sterling Dey wants to reclaim his title. This sleepy alley in a small Texas town with no distractions is the perfect place to practice-until Sterling lays his eyes-and more-on the joint’s sultry night manager. As attraction becomes more than desire and the pins start stacking up against them, Candy and Sterling’s future may just come down to the roll of the ball. 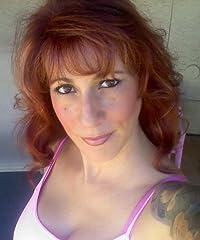 The stirrings of the potential author within Dorothy F. Shaw became evident when she first blogged a detailed account of how she met and married her husband. Shortly after she stumbled, quite accidentally, into writing poetry. Poetry begat short stories. Short stories gave way to her novels.
Evident from the very beginning was her voice as an author that is welcoming, real and charming, packed with wit and sarcasm. Although she’s a sucker for a heart wrenching romance with no happy ending, she does give her readers the happy ending they desire. But her stories will always include slightly broken people forming relationships full of heartbreak, pain and angst along the way, as well as plenty of sharp humor and sex appeal. As she sees it, the journey is the best part.
When Dorothy’s not writing, she’s a wife, mother, friend to many and a corporate VP. When asked about her tattoos she’ll tell you she has only one. She loves Sunday dinners with her family and friends in her home, prefers riding her motorcycle beside her husband all around Arizona and spending weekends in their camping trailer, aka The Rolling Condo. She truly lives and loves in Technicolor!
Dorothy welcomes emails at: dorothyfshaw@gmail.com 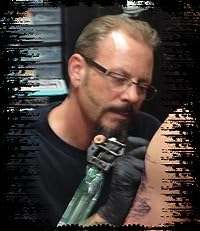 T.D. Hoffman is a man of many talents. Not only is he an award winning tattoo artist, known in the tattoo community as Wookie http://www.wookiestyle-tattoos.com/, he’s also a biker as well as a dedicated father of four who was never afraid of dirty diapers or putting pigtails in his daughter’s hair. He rides his Harley Davidson in his cool and sexy Wookie style way that most could never begin to match.

Unafraid to try new things, T.D. simply decided he wanted to write a novel and so it began from there. He experiences life to its fullest and loves to express it through his family, art and stories. Drawing inspiration from his favorite authors such as J.R. Ward, Kresley Cole and Lora Leigh, he’s currently working on his Urban Fantasy novel series.

When he’s done slinging ink for the day, designing promo items and logo’s for authors, doing dishes or laundry and chasing kids around, he spends his time on his back patio, enjoying the Arizona evenings with his wife, writing.