Random Readings from the

Robin L. Rotham’s Not So Over Eli

Tidbit from
RG Alexander’s To The Bone

I hope you are having a wonderful Thanksgiving holiday! I am spending it with my parents, siblings, in-laws AND *drumroll* My Bookstore Beau is meeting my family! *Kermit flail* I am thankful for them and for all of you who support my efforts here at The Book Tart. 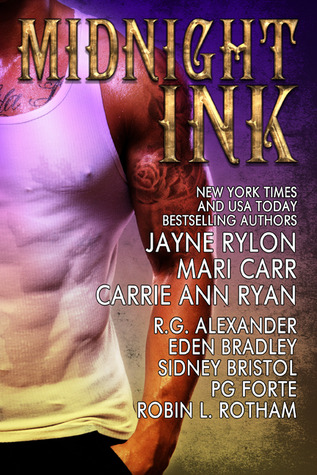 One tattoo shop in one infamous city sets the stage for 8 stories about resolutions, kink, love and ink. Get ready to let the good times roll!

Report For Booty by Jayne Rylon
When Burke Levine got marching orders, he couldn’t bear to make his girlfriend Chavon White a military widow. Years later, discovering his name tattooed on her perfect ass via a New Orleans’ artist’s portfolio confirms his epic mistake. Will Midnight Ink’s New Year’s Eve party grant them a second chance?

Not So Over Eli by Robin L. Rotham
Paramedic Bart Rigger finally has the life he wants rather than the one his father dictated, thanks to hot new fiancée Rhonda Giannetti. But a whirlwind trip to New Orleans puts it all at risk when he’s forced to confront unresolved feelings for his first love, tattoo artist Elijah Bell.

Inked Memories by PG Forte
All Sophie wants is a tattoo to commemorate her battle with cancer. What she gets is celebrity tattoo artist Declan Ross, the same sexy bad-boy who used to rock her world. This time, they’ve both got scars and it’s still the ones you can’t see that are the hardest to cover.

To The Bone by RG Alexander
Etta Santos has one resolution—to cover up the last visible evidence of her past. When Christie Ryder, sexy musician and new owner of Midnight Ink, pursues her, he seems too good to be true. His music touches her soul, but can she risk trusting another bad boy with her heart?

Blank Canvas (Big Easy #1) by Mari Carr
Disillusioned by divorce, Jennifer’s about to discover her wild side, starting with a tattoo from Caliph. And continuing with submission, spankings, wax play…all under the skilled hands of her wickedly sexy tattoo master.

♥ Buy this ebook from: Amazon |Barnes & Noble | ARe