Oh *sigh* I can’t wait to clear my schedule and make time to visit the Promise Harbor Wedding series. I’ve heard so many good things about these contemporary romances. I ADORE the covers and all the authors and well… weddings! I worked in a bridal store for 7 years. I LOVE weddings. Check out Meg Benjamin’s book Bolted . It just came out on  April 2nd! *Snoopy Dance*

We have a yummy excerpt from this 2nd book in the Promise Harbor series. Plus you can enter the contest for a chance to win a $50 gift card. 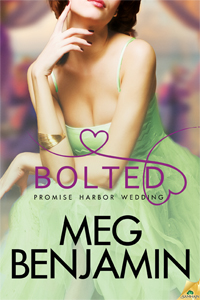 Sometimes you have to get lost before you can find yourself.

Greta Brewster McBain in a bind. Two, if she’s really counting. First there’s the can-barely-breathe, bridesmaid’s dress from hell. Second, the stranger who just carried her “perfect” brother’s fiancée out the church door has made it impossible to tell her own mother about her own divorce.

Rather than confirm her reputation as the family screw-up, Greta takes a drive to clear her head.

Trapped in a hole and unable to reach his cell phone, Hank Mitchell is resigned to becoming a permanent part of his own archeological dig when help arrives—in the form of a woman who looks like a Gone With The Wind refugee. Behind the ruffles and lace, though, is something he appreciates: a woman who isn’t afraid of a little dirt.

Their instant connection draws Greta into the eccentric world of the Hotel Grand, where she impulsively trades her hoopskirts for an apron. Soon things are getting hot, not only in the hotel kitchen, but in Hank’s arms…

♥ Buy this ebook from: Amazon | Barnes & Noble* | Samhain
* will be updated as soon as available

What he saw next almost convinced Hank he was hallucinating. The woman was dressed like something out of a movie: a huge bell-shaped skirt covered with ruffles, a wide sash at the waist, a low-cut neckline that stretched across her shoulders and revealed what looked to be more-than-respectable breasts. After a moment, she knelt at the edge, peering down at him, and he saw short brownish hair and dark eyes. “Hi,” she said.

“Hi.” He took a quick breath, hoping to god she was real and not a particularly bizarre dream. “Could you possibly come down here and give me a hand? I’m stuck.”

She frowned slightly, dark eyes narrowing. “Possibly. What do you need exactly?”

“My foot’s wedged in here.” He pointed to his foot, still jammed between the two large rocks. “Maybe you could help me pull the rocks apart so I could get loose.”

She frowned, considering. “How about just taking your shoe off?”

He shook his head. “I tried that. It’s too tight. I can’t get my foot out of the shoe.”

“Oh.” She was still frowning. “Okay, just a minute.” She disappeared from the edge, and for a moment he was unreasonably afraid she’d gone. Then he saw the bell-shaped skirt at the top of the ladder. “Hang on, this may take a while,” she said cheerfully. “This skirt isn’t exactly made for climbing up and down ladders.”

“That’s okay, take your time. Don’t hurt yourself.” He leaned back slightly against the side of the excavation. He still wasn’t entirely sure he wasn’t hallucinating, but at least it was more entertaining than standing there wondering if he could amputate his own foot with his pocketknife.

He watched the huge green skirt floating slowly down the ladder. Given the half of the girl he could see from the waist up, he assumed there were legs and a rear end under there somewhere, but there was no telling from what he could see currently. She looked a little like one of those dolls that had only a cone underneath the costume.

The girl in the green dress reached the bottom of the ladder, lifting up her skirt to step free. She was wearing white running shoes, he noted. Good thing, too. She probably couldn’t have gotten down that ladder if she’d had to worry about her shoes along with her skirt.

She gave him a bright smile, pushing her bangs out of her eyes. “Now what?”

“My foot’s sort of wedged in here at the base of the wall. Maybe you could push the rocks on one side and I could push on the other. I don’t have enough leverage to do it all myself.”

The girl frowned again. “Let me give it a try.” She bent down at his feet, giving him a great view of her cleavage.

Jesus, Mitchell, she’s trying to help you. Do not ogle her.

Meg Benjamin is an award-winning author of contemporary romance. Her Konigsburg series for Samhain Publishing is set in the Texas Hill Country. Book #3, Be My Baby, won a 2011 EPIC Award for Contemporary Romance. Book #4, Long Time Gone, received the Romantic Times Reviewers’ Choice Award for Indie Press Romance. Book #5, Brand New Me, won the Holt Medallion from Virginia Romance Writers and was nominated for Book Of the Year at Long and Short Reviews. Meg lives in Colorado with her DH and two rather large Maine coon kitties (well, partly Maine Coon anyway).