Heather Long’s new paranormal romance Taking The Stage is out now from Samhain! She is attending Authors After Dark this week (so jealous!)  I’m helping spread the word about Taking The Stage and tigers and romance oh my! 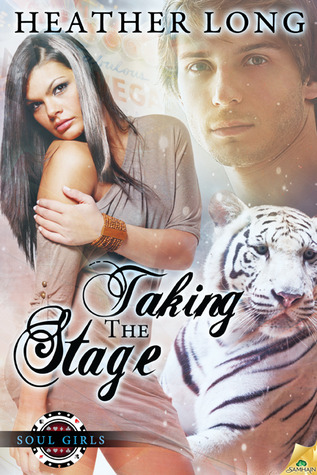 Roseâtre takes one look at the white tigers that the stage manager has brought in to shake things up at the Midnight Mystery Lounge, and nearly has a heart attack. It doesn’t matter that the beautiful creatures’ handler raises her pulse and makes her want to purr. The tigers are sure to recognize her—and arouse her need for the hunt.

Pride outcast Anthony diNapoli wasn’t expecting to encounter an Amazon princess when he brought his white tigers to the lounge. The lucrative show will go a long way toward securing his future, but not if he gives in to the urge to make her submit to his dominance, and claim her as his mate.

No matter how desperately her body aches for the sun-kissed stranger and his completely lickable abs, Roseâtre is no man’s prize. Yet she finds herself hungering for Anthony to defeat her and take her for his own.

It’s show time in the Arcana Royale’s Midnight Mystery Lounge and all bets are off.

Warning:  Contains sword fights, shackles, sexy showgirls, and a game of dominance between a determined weretiger and an Amazon who refuses to submit. Blades, bliss and battles, oh my!

“Not the toes.” Roseâtre refused to squeal. As lead dancer for the Arcana Royale’s Midnight Mystery Lounge, she would never squeal or scream, but her voice pitched high enough that the syllable at the end of toes cracked.

The great white tiger snuffling her feet through the five-inch strappy black-and-sapphire Louboutins rolled his head away. Instead of obeying, he stroked a whiskered cheek down her bare leg.

“Cut!” Voice booming, the show’s stage manager hustled out from the wings. Heidi was a brisk woman with a quick temper and a stout body, dedicated to creating the best shows. After Pandora’s escape from her contract, she relied on all of her girls to have the same dedication to the performance, Roseâtre more than most.

Pandora. She’d always made the lead look easy. She’d walked out on the stage and owned the audience. Roseâtre believed Pandora could have shared the stage with twelve chimpanzees and it wouldn’t have mattered. Gazes would have been riveted to the tawny nymph.

The white tiger stretched out his neck and yawned, showing off a mouthful of glistening teeth. He flexed his paws, claws scoring the stage. She wasn’t fooled by the sleepy-eyed expression or house-cat similarities. Big cats weren’t pets.

The rest of the dancers relaxed from their poses, some even dropping down to coo and stroke the cats whose arrival had elicited a long round of awws and aren’t they sweets. Roseâtre, however, shifted away from the cat with his tickling whiskers and raspy tongue.

“Rose?” Heidi beckoned, a pen behind one ear and a notebook tucked under her arm. She pursed her lips in a you’re-not-in-trouble-yet moue, but the wrinkles knitting her brow told an entirely different story.

“Yes, ma’am?” Roseâtre didn’t drag her feet. One certainly never dragged Louboutins, but she couldn’t quite resist displaying her mutiny with an uplifted chin and wrinkled nose.

Her nose twitched. Her sinuses burned. Her eyes threatened tears. But she maintained her composure.

“Look, I know you’re not thrilled with this idea.” The opening gambit was classic Heidi, softening her up for the too-damn-bad often attached to those statements.

Closeted together at the far end of the stage, Roseâtre was glad to be out of earshot of her shield-sister Cerveau, the other dancers and thankfully, the damn tigers.

The Midnight Mystery Lounge was closed for an entire week so the dancers could learn this new act. She’d woken to the bad news that the diNapoli Tigers—tigers—were joining the show for a three-month trial to drum up business in the magical casino and resort.

“But you’re just going to have to get over it. The apothecary will provide you with a tea for your allergies. We need this show and you’re the headliner. That means you and the tiger will be all over each other on that stage and you’re going to love it.”

And there it was, the verbal slap demanding submission. The command chafed. But a promise was a promise and she was as bound by her oath as her shield-sister Cerveau was by her curse.

“Is there any way we can do this without cats?”

“Not really, no.” The sympathy was real, but from Heidi’s compressed expression, the stage manager was plainly not on Roseâtre’s side. “I’m sorry, Rose. But the diNapoli Tigers were an enormous success in Monaco and Paris. We need them for resurgence of interest or the Overseers may very well break up the show.”

“Really?” Panic drifted under the surface of her skin, sending her heart puttering. The Overseers controlled the Arcana Royale, the sprawling complex where meta-humans of all types were welcome and could be themselves. They controlled the shows, the people and in the case of the dancers, their souls. Breaking up the show meant the dancers with varying leases on their souls could be placed elsewhere at the Overseers’ discretion.

Worse, Roseâtre and Cerveau could be separated. Roseâtre couldn’t allow that to happen. She’d sworn an oath. Pride could be sacrificed. Honor could not.

A shield-borne oath was an oath.

No simple answer existed. Roseâtre glanced over her shoulder to where the great cats lounged. Some groomed themselves while yet another rolled over on its back, presenting its belly to Peppermint for attention. Of all the dancers, Peppermint was the most gracious, the most loving and the most likely to enjoy gamboling with the tigers on the stage.

“I assure you, nothing is wrong with my cats.” The dark, deep masculine tones teased up her spine. She jerked her attention back to discover a bare-chested, bare-footed blond god had joined them.

Oh my. Who did he kill to get those abs?

She snapped her jaw shut with a flicker of irritation, and forced her gaze up from the hard six-pack of clear-cut muscle to roam over the ripped planes of his chest and shoulders.

Dear gods, does it end?

The cool dislike in his blue eyes slapped her back to the present. Everything about the man seemed larger than life, from his thick thighs, easily three times the size of hers, to his wide hands and square, chiseled jaw.

Be professional. She extended her hand and kept her gaze focused above his chin. Despite the five additional inches her designer shoes added to her considerable height, topping at around six foot, the man towered over her.

And he inspected her with an air of detached amusement, his gaze clearly dipping below her chin to where her breasts strained against the confinement of the black leotard.

“Your pleasure, I’m sure.” The bastard smiled and ignored her hand.

“Anthony’s cats are in high demand, and he’s graciously consented to this trial contract so we’re going to do the best we can to make the most of this situation.” Heidi turned to Anthony as though unaware of the icy drop in Roseâtre’s regard. “We’ll add extra rehearsal time so Roseâtre and her cat can get used to each other.”

We will? Incredulous, Roseâtre could barely pull her eyes away from Anthony to look at the stage manager. “More rehearsals?” Tired of holding her hand out to the air, she let it drop.

“Absolutely.” Heidi nodded briskly, clapping her hands and striding away to gather the dancers, completely ignoring the cats with the poise of one who was likely more dangerous than the wild animals. “Ladies!”

Cerveau stood next to Kiki, Peppermint and Amber, the question in her expression obvious, but Roseâtre shook her head, waving her off with one short hand gesture. She didn’t need backup.

“So what’s your problem with cats, princess?” The words shivered up her spine. Anthony’s voice prowled behind her, his body heat brushing against her in challenge and invitation.

She didn’t have to play nice. The bastard couldn’t be bothered to shake her hand.

“It might. You’re going to be riding my tiger every night for the next three months.” The words dripped with mockery and some other indefinable emotion.

Roseâtre shifted away, sparing him a dismissive look. She’d practiced the art of cool disdain for years under her mother’s tutelage. He might call her princess in his low, rolling sexy voice as a jest, but it didn’t make it any less true.

“You’re getting sarcasm on my shoes.” She lifted one, taking great care to inspect it.

Anthony threw his head back and laughed, a deep belly-trembling shout of amusement.

The noise drew the dancers’ attention like children to free chocolate. Cerveau’s face twisted comically, a mixture of censure and curiosity reddening her cheeks. She wouldn’t approve the tone, but she would appreciate the cause.

“You still haven’t told me why you don’t like my cats.”

Head canted to the right, he studied her. The deep blue of his eyes was enhanced by a circle of darker blue along the iris. His pupils seemed to blink on their own, but that wasn’t possible. Roseâtre forced her gaze back to his dimples, just barely disguised by the thick rush of blond beard coating his cheeks.

“Cats are magnificent, bold and affectionate creatures. They are slow to trust, but have unshakable loyalty.”

“Until you’re dead and then they just eat your corpse.” She shuddered.

He laughed again. “You don’t need your body when you’re dead.”

She was missing everything Heidi was saying to the other dancers. Clearly, the stage manager didn’t care because she wasn’t even looking in Roseâtre’s direction, much less shooting her with her optic laser beams of impatience.

“I’d rather my body was undisturbed, thank you very much. The idea of anything feasting after I’m dead is unappealing.” Not to mention sacrilegious. A warrior’s death should be honored with blades and flame, never teeth.

Or, the gods forbid, a hairball. Roseâtre grimaced.

“Would you prefer they do it while you’re alive?” The silken whisper brushed against her ear. Tingles raced over her skin from the sweep of his beard on her cheek.

Heart leaping, Roseâtre barely managed to suppress her startled scream and settled for smacking his chest. The hard muscles didn’t even budge as her hand made contact, leaving a vivid, white mark against the golden tan.

“You really need to stop doing that.” Enough is enough. The man might be here at Heidi’s request or the Overseers’, but his job was to deal with the damn cats.

“Stop what?” The mock innocence coating his teasing grin reminded her more of the tiger yawning than it did a conciliatory gesture.

“Invading my bubble.” She rolled her hand in the air between them. “You haven’t been invited into my bubble.”

The coolness in his gaze warmed considerably, his grin widened. He was obviously enjoying the hell out of her irritation.

“How does one get invited into your bubble?” He batted the air in front of her, a downright playful gesture that sank its claws into her belly.

Nope. Not going to be turned on. 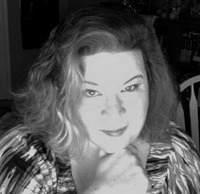 A national best selling author, Heather Long lives in Texas with her family and their menagerie of animals. In addition to military romance, Heather writes a wide variety of romance from paranormal historical western romance to contemporary romance and romantic suspense. She loves characters and the stories they have to tell. As a child, Heather skipped picture books and enjoyed the Harlequin romance novels by Penny Jordan and Nora Roberts that her grandmother read to her. Heather believes that laughter is as important to life as breathing and that the Easter Bunny, the Tooth Fairy and Santa Claus are very real. In the meanwhile, she is hard at work on her next novel.