Hearts of Shadow is a story filled with danger and pain and loss… and through it all winds the strong ties of love. There is so much going on in this story! It’s a post apocalyptic battle to keep the world from going to the gods and demi-gods control. I love Kira Brady’s world building. She has created an alternate world, focusing on Seattle, with Babylonian and Norse mythology, dragons (!), a Native American shape-shifting race, magic and steampunk elements. Hearts of Shadows weaves all these cords together along with a passionate love story that sucked me in and wouldn’t let me go till the last page.

The heroine is Grace. She’s tormented, tortured, bound and yet still burns bright with a fierce determination for freedom, for choice. The word fierce embodies Grace in my imagination. Tiny but fierce. She has a warriors spirit. She strives to defend and protect others from the losses she’s suffered. I adored Grace.  I hurt for the betrayals and indignities she’d been through… I was rooting for her to let down some of the walls she’d built around herself and give love a chance.

And the hero… Leif. *swoon* He’s a scholar and a dragon. He is the leader of the Drekar since his brother Norgard went off the deep end and died bringing chaos and hell into world. There is a lot on his plate to say the least. He didn’t ask for responsibility. He’s a genius and would prefer to tinker and invent tools to help rebuild civilization. But once he meets Grace his attitude towards ruling adjusts and I liked seeing his strength, protectiveness and intelligence channeled  towards helping Grace and ultimately all of Seattle.

There are so many obstacles between them. She’s human. He’s not. She is slave bound to him because of his brother. He doesn’t have the power to release her on his own. She has to decide if she wants to give him a chance, if she wants to see him and not paint him with the hatred she feels toward the Drekar because of his brother. I loved how gentle he was with her and his perseverance in showing her how much he admired and respected her strength.

The battles in this adventure are scary and amazing. Grace is trained to fight the aptrgangr and send the wraiths back to the Land of the Dead. The Babylonian god Tiamat’s Heart is seeking freedom. And the demi-god Kingu got free when the gates between worlds fell and wants revenge for his imprisonment. Kingu doesn’t have a body yet, but he is a powerful wraith and is seeking a way to become corporeal and directing an army of aptrgangr (zombie like humans who’ve been taken over by wraiths) to help with his goal. The races of Seattle are in a battle for their city and ultimately the world. Gahhh! No pressure.

Oh! and the sex? yum! The sensuality between Leif and Grace was deliciously hot and emotional. Just how I need my steam.  I loved seeing Grace’s courage in letting Leif matter to her and his determination to wait until she made up her mind.

♥ Forget all pretense of civilization. Throw out all notions of decency. At this moment he wanted to spirit her away to a mountain cave where he could hoard her as treasure all for himself, like the dragons of old had done.

♥ He thought she was scared, but she would kick fear in the teeth when she saw it.

♥ Warmth flooded him. She might be strong. But he was weak. Weak for her kisses. Needy for her touch. Addicted to her energy and presence. To her prickly, pugnacious, generous, giving spirit.

I was fascinated by all the threads of science and magic coming together into a cohesive whole. I enjoyed seeing how the different races approached their enemies and was on the edge of my seat for the climatic battle. If you are in the mood for an intriguingly different paranormal romance with violence, death, dragons and zombies oh my… and the strength of love winding throughout then try the Deadlass series. Hearts of Shadow is a moody, atmospheric, dangerous and sexy ride and I want more.

PS. Oh! I listened to the unabridged audio book for almost half of this story because I had a lot of driving to do and wasn’t ready to put the book down! I really enjoyed the narration by Xe Sands. 😀

♦ ARC provided for review for my honest opinion. 🙂 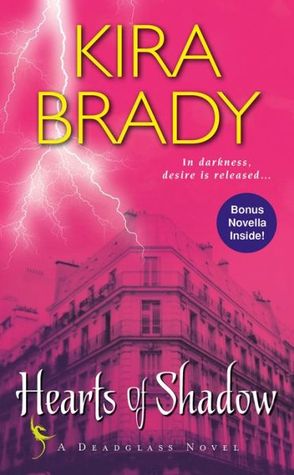 Add to Wishlist
Grace Mercer’s unmatched wraith-killing ability made her the unofficial defender of a city shattered by supernatural catastrophe. So there’s no way she’ll allow the new regent of Seattle’s most powerful dragon shifter clan to “protect” her
from a vicious evil stalking the ruined streets—and keep her from the freedom she’s risked everything to earn.Leif’s science-honed instincts tell him Grace is the key to keeping shifters and humans safe. But helping this wary fighter channel her untapped power is burning away the dragon’s sensual self-control and putting a crucial alliance at risk. Soon the only chance Leif and Grace will have to save their world will be a dangerously fragile link that could forever unite their souls…or consume all in a storm of destruction.