*squee!* Mad Kermit flailing/Snoopy dancing is going on (it’s kinda scary! 😛 )
I have PJ Schynder on my Google Giggle Hangout couch!!!! I adore her so much, her stories and herself. 😀 We had a wonderful chat… after she and her guy helped me figure out my technical glitches *sigh* Anyways… lots of silly funness to celebrate the launch of PJ’s London Undead series with Bite Me... Werewolves and zombies and smexy times oh my… not zombie smexy times though! *snort* these are not the sexy type zombies. 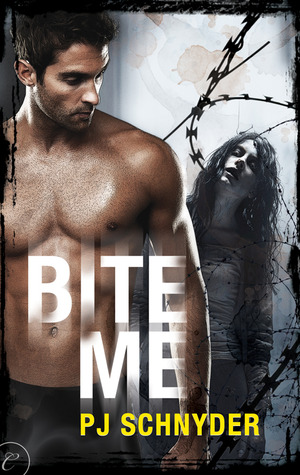 Add to Wish List
Few people walk the streets of London since the zombie outbreak, but that’s not an issue for Seth. As a werewolf, he can handle himself and save humans reckless enough to take a nighttime stroll. While on patrol he comes across a group of people under attack. The one woman brave enough to take a stand against the zombies catches his eye—and not just because of her way with a gun. Learning the beautiful woman is homeless and fends for herself only intensifies his urge to protect and care for her.Maisie can’t help but admit that she’s attracted to her werewolf rescuer. She’s drawn to Seth’s strength and ferocity, and finds herself opening up to him in ways she never imagined, even though she’s determined to not rely on Seth or anyone else. She doesn’t want another person to get hurt—or die—for her sake. She has enough scars, physical and emotional, from the last time…But when Seth realizes something is drawing the zombies to Maisie, there may be nothing he can do to save her…
31,000 words

What: Bite Me Prize Pack!