Dead Plains is a wild ride of zombies, death, despair and hope. The overarching theme that stood out to me, while reading this book, was that the group of characters was looking for a place to call home.

♦ “A home was the one thing he desperately wanted, especially since he’d never really had one before. But the idea of ever finding one slipped further away with the impending arrival of the new baby.”  (Dead Plains, Angela Scott)

The zombies made it all but impossible to settle down in one place for more then a day or so because they would sniff them out and sooner or later they would descend on the living with the desire to feed.

♦ “Don’t do anything dangerous.” She (Willa) smiled. “If you haven’t noticed simply being alive is dangerous. I can handle myself.” (Dead Plains, Angela Scott)

I thoroughly enjoyed the characters that I met during my journey through this story. Each character was well developed and I grew to love and/or hate them as their journey progressed.  I laughed out loud, cried, and raged at different points in this book. Angela is an amazing author who definitely knows how to elicit a wide range of emotions from her readers through her great story telling.

Dead Plains is the third and final installment in Angela Scott’s The Zombie West Series. Wanted: Dead or Undead and Survivor Roundup are the first and second books respectively in The Zombie West Series. Having read book three, Dead Plains, I now need to go back and read the first two books to find out more of the story that was hinted at in Dead Plains but not fully explained. The wonderful thing about Dead Plains was that even though I had not read the first two books I was able to plunge head first into the story and not feel frustrated or lost. That is a true sign of a great writer, being able to write a book in a series, which can be picked up and read even if the previous books have not yet been read. I highly recommend reading Dead Plains and anything else Angela Scott has written! 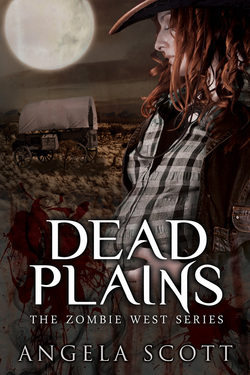 “…Sometimes, the ones you least suspect are the ones that should worry you the most….”People aren’t always what they seem, as Red has experienced all too well. Strangers are feared, towns are avoided, and everyone’s intentions are scrutinized… even those closest to her. Her coveted ability has been revealed to far too many people, and now that a tiny heartbeat thumps and grows beneath her own, the risk has never been greater.

As the group of ten searches for a safe haven, a place to finally call home, the sobering reality of it all finally settles over them: nowhere is safe, nothing is permanent, and death is everywhere. One by one, Red’s reluctant posse grows smaller, as death claims some, and circumstance claims others.

It couldn’t be a worse time to bring a newborn into the world… but the baby is coming.