I’m delighted to help spread the word about Lola Salt’s chick lit/adventure/comedy of errors novel The Extraordinary Life of Lara Craft (not Croft)! This novel made me snort giggle and wince. (click HERE for my review). Check out the excerpt (glitter!) and make sure to enter the tourwide contest! *points down* 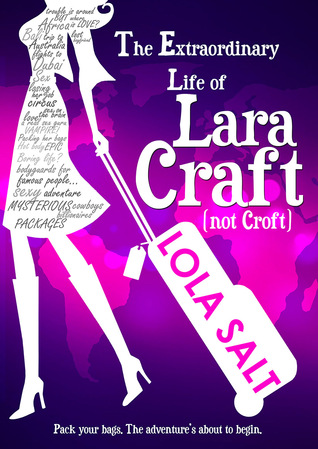 The Extraordinary Life of Lara Craft

From bestselling authors Becky Wicks (Before He Was Famous, Before He Was Gone) and Sarah Alderson (Hunting Lila, Fated, Come Back to Me) comes a new romance with a difference…

After losing her job and her boyfriend on the same day, Lara’s beginning to wonder if her life can possibly get any worse. Then along comes Jamie, a childhood friend, offering her a job delivering mysterious packages to random destinations around the world. Suddenly, things are looking up.

Lara packs her bags and sets off on an epic adventure, meeting billionaire Arabic Princes in Dubai, rugged cowboys in Australia, a sparkling wannabe vampire in LA, a love guru with sex on the brain in Bali and Angelina Jolie’s bodyguards in a hostage situation that can only be resolved with some very special eggs. But though trouble always seems to find Lara, it seems love is rather more elusive.

Pack your bags. The adventure’s about to begin!

The Extraordinary Life of Lara Craft

Lara watched with baited breath. With a sigh he lifted a roughly folded shirt out of several billowing folds of tissue paper and then, reverentially, brought it to his face and took a long hard sniff.

She took a step backwards towards the door but froze when she saw that Blaine was now tearing off his own shirt, exposing a ripped torso in the process. She did a double take – was that a shimmer of dazzle dust coating his muscled chest? Yes. He was definitely sparkling. If there was one thing Lara could spot at fifty paces, it was glitter on a man. She was transported momentarily back to the circus, to the dressing rooms, as the macho ballerinas agonised over how many sequins one could glue to one’s backside without looking gay.

Blaine tossed his shirt to the floor and pulled on the new one, pausing to stroke it lovingly. He looked to be on the verge of tears. Lara wasn’t sure what to do or say as he studied himself in awe, turning in a circle, holding out his arms. She almost wanted to hand him a mirror, shop assistant style.

‘Um, is there something special about the shirt?’ she asked, finally. ‘I mean it looks very nice on you,’ she added, though truthfully it was several sizes too big for him and looked rather like it needed a wash.

Blaine glanced up at her, as though he’d only just remembered she was in the room. ‘This isn’t just any shirt,’ he told her. ‘This shirt was worn by he-who-must-not-be-named in the first of the Twilight films.’

Lara’s mouth fell open. She blinked several times. What was he talking about? Voldemort wasn’t even in Twilight. Blaine was still looking at his own chest and sniffing the fabric in random places. ‘Don’t you recognise it?’ he said.

She shook her head.

‘The scene where Edward battles James,’ he explained, ‘the vampire who wants to kill his mortal love, Bella Swan.’ He stroked the shirtsleeve. ‘I bid for it on eBay.’

Lara stared at Blaine for several seconds before remembering to shut her mouth. ‘Right,’ she managed to whisper, staring at the shirt and then at the good-looking, yet clearly insane man wearing it.

She took another step towards the door, wondering if she should make a dash for it. Maybe she could run next door to George Clooney’s and collapse into his arms, sobbing in fear over the deranged Twihard who’d just burst into her room unannounced. That could work. As far as pulling techniques went it was at least original. But… oh crap, he’d gone out in the limo. She swallowed. She was on her own.

Lola Salt is the pen name for two bestselling authors: Sarah Alderson & Becky Wicks.
Becky has written several non-fiction travel diaries for Harper Collins; Burqualicious, Balilicious & Latinalicious, and the new adult Starstruck Series featuring Before He Was Famous, Before He Was Gone and Before He Was a Secret.Sarah is better known for her Young Adult novels, particularly the critically acclaimed Hunting Lila series (published by Simon & Schuster), as well as the Fated series. She also wrote the new adult romance Come Back To Me under another pen name of Mila Gray.The two authors met in Bali. Come visit us sometime and we’ll buy you a coconut.

Who: Open to International Entries too 😉