There’s just something about rock stars isn’t there? *swoon* That swagger, that talent… I’m thrilled to help Lashell Collins spread the word about her NEW box set! The Essential Jagged Ivory collection includes all five books in the series and is on sale for a limited time for only 99¢!!!

*squee!* I got my copy already. Get yours and meet the band members of Jagged Ivory. Scroll down to see pictures from Jagged Ivory’s world tour… We’re kinda playing where’s Waldo… only Where’s Jagged Ivory? 😀 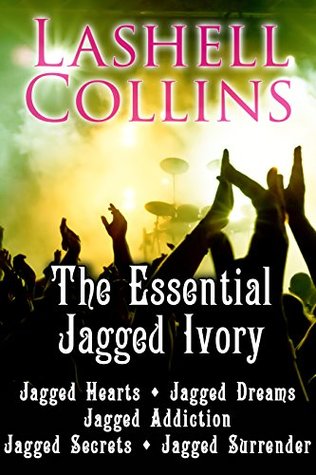 Sneaking around with the manager’s daughter. Hollywood marriage bust-ups. Drug addiction and rehab. Secrets and lies, and sex tapes. And that’s just scratching the surface of what goes down when the world’s biggest rock band goes on tour for the summer!Noah, Cory, Benji, Buzzy and Otis are Jagged Ivory, the hottest rock band on the planet. But they’re also a family who takes care of one another through thick and thin, blood and sibling rivalry be damned. Sexy, fun and irresistible, these guys rock hard, party hard, and love even harder! Come meet the boys of Jagged Ivory, and the women who love them, and let them rock your world!

make a guess then click to see if you're right »

Yep. They shared pictures from Germany!

The energy in the stadium was electric and palpable, and Mercy could feel it even from her position just off the stage in the wings. She had stood there the entire show, watching in awe as Jagged Ivory brought the entire arena to its feet. The crowd was so pumped, and she could easily see that the guys were feeding off their energy. It was the most amazing experience, watching from this vantage point. And now that she was sort of friends with them, it made it all the more surreal for her. She had seen them perform live countless times, both before they had made it big and since. But this felt somehow different. This was more exciting.

The house lights dimmed once again and the full-to-capacity stadium roared with adulation as the guys said goodnight and left the stage for the final time. It had been an incredible show and they had certainly given the audience their money’s worth, performing for two solid hours. And Mercy had never felt more star-struck than she did at that moment. When the guys came off the stage, one by one, she watched them walk past her feeling like a breathless teenager.

She followed them and Mike as they made their way back down to the dressing room. Once there, Noah grabbed a clean towel from the stage hand offering them, and took a moment to bury his face in it, wiping away the pound of sweat gathered there before proceeding down his bare chest. As usual during a show, he had long discarded his t-shirt under the heat of the lights and the exertion of the performance. It was customary for him to remove it onstage and toss it out to the crowd about halfway through a show.

Mercy stood timidly in a corner of the room, frozen to the spot as everyone bustled around her, and she watched him. To her, it felt as if he were the only other person in the room. The towel he held in his hands glided slowly over the medieval dragon tattoo that snaked its way from the right side of his back around to the right side of his chest and abdomen. God, he was perfection, and Mercy could feel herself drooling. He had been magnificent onstage. Wolfish and sexy. His every movement had excited her like foreplay. She wanted him. God help her, she still wanted him. Even with the memories of his rejection still fresh in her mind. What was her problem? Was she simply a glutton for punishment? She had to get a grip on herself.

She was snapped out of her lowly self-assessment when her dad suddenly called out, “Hey, Noah, your little friend from the restaurant is waiting in the Green Room!”

Noah grabbed a fresh t-shirt, and Mercy watched as he quickly slipped it on and rounded the guys up to go greet their guest. She was astounded as she watched him play host to that little girl and her parents. He was so genuine and animated, and he looked as though he were really enjoying himself. He made sure all the guys signed her tour program, and he insisted they take a picture together. He did everything he could to put young Mindy Peters on cloud nine, and Mercy was amazed.

She was staring at the scene in fascination when he suddenly looked right at her. “Hey, Mercy! Would you mind?” he said, holding the kid’s camera out to her.

“Oh, sure,” she said anxiously, stepping forward to take the camera from him. She felt an internal shock when their fingers lightly brushed one another’s, and she looked up slightly startled, only to find his eyes boring into hers. She could feel her face flush slightly as she looked away and took a step back to take the picture. She took one shot of Mindy and her parents with the entire group, and one shot of just Mindy and Noah. And she smiled at the girl when she handed her camera back to her.

“You’re so lucky to be his girlfriend,” the girl gushed as she thanked her and walked away. And Mercy and Noah stood staring at each other with wide, shocked eyes, wondering how she had gotten such a wrong idea.

Lashell Collins spent the last twenty years of her life working in Veterinary Hospitals and Garden Centers. But whether she was surrounded by the adorable puppies and kittens she helped care for, or by the beautiful flowers, trees and shrubs, she constantly pursued her favorite pastime – reading romance novels and imagining herself as the heroine in each and every one of them. She began writing as a way to work through her grief after the loss of a few people who were special to her, and she found it to be cathartic, so she kept at it. She self-published her first novel in 2013. Since then, Lashell has self-published ten titles across two series – the Pierced Trilogy (romantic suspense), and the Jagged Ivory Series (contemporary romance) – and is hard at work on another two series for this year. All of Lashell’s stories are full of heart and romance, with smart dialogue and spicy sex scenes.

When she’s not writing, Lashell enjoys reading, shopping, eating Chinese food, and riding on the back of her husband’s Harley-Davidson. She loves watching General Hospital and Grimm. She is a huge music fan and is completely obsessed with Slash. Lashell is a member of the Romance Writers of America. Drop her a line; she loves to hear from readers.

Check out the rafflecopter 😉