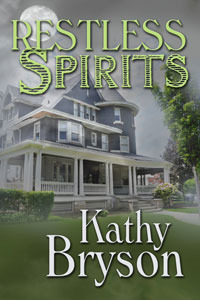 I’m dealing with mountains of boxes and trying to blend my life with my Bookstore Beau now that I’ve moved to Colorado Springs and deal with contractors and insurance adjusters to get our home repaired!

I am so grateful for the help of the book community and all the authors and readers who have helped me smile and just keep breathing. Kathy Bryson definitely made me smile!

She shares some of her housing calamities and tips for dealing with the restoration. I’m going to take her advice! *nods* Enjoy and make sure you take a look at her novel Restless Spirits and enter my Saving The Book Tart From Moving Madness! She’s added an ecopy of Restless Spirits too! 😀

When I read about your adventures, Kat, with popcorn ceilings and insurance companies, you had my complete sympathy. Been there, done that! When I bought my house, it was newly renovated, but all the faucets broke the first month. I moved there from a condo where rats had set up housekeeping in the walls, but no one could decide who was responsible.

These were both a step up from renting. My first apartment was cheap in a run-down neighborhood, and the kitchen sink fell off the wall during Thanksgiving dinner. To this day, I can’t look at turkey without picturing ants swimming. At my last apartment, the police department stopped taking calls because they had so many complaints. The owner was fighting with the city over garbage pickup, and again, there were rats involved.

Naturally, I channeled all this experience into my writing (and got a cat). Renovating your characters’ homes is the ideal way to decorate while avoiding fuss and expense! After all, what could possibly go wrong converting a hundred-year-old, former hospital into a bed and breakfast? Cue the sinister laughter!

In Restless Spirits, Marilee Harper finds electricity and plumbing are the least of her worries. Her usual practical directness doesn’t always succeed while working with a cook who channels Elvis, contractors who act like paparazzi, and her difficult mother. Sometimes you bring your troubles with you. Then the haunting goes too far!

Now my advice won’t necessarily help because after all, you’re the one living through this. But for what it’s worth, I suggest concentrating on what’s broken first. The rest will follow in good time. Always get multiple estimates, and always take breaks. Walking away for a good dinner and cold drinks will help!

On the plus side, you got that popcorn ceiling down. I could never find a contractor willing to do that! And if it should turn out to be more than asbestos, I have the email of some really good psychics.

Marilee Harper is desperate to find another job after she accidentally set fire to the home of the richest woman in town. Converting an old hospital into a bed and breakfast seems like a golden opportunity. But faucets and lights turn themselves off and on, and old baseballs fly without help. Stressed and aggravated, Marilee wants nothing more than to redeem herself, even if it means hands off her sympathetic boss!

John Smith has every confidence in the bossy, strong woman he hired to launch his bed & breakfast. She handled difficult customers at the bank and now she’s handling electricity and plumbing and whatever unseen force keeps throwing baseballs. Who can blame him if he starts to admire the woman in more than strictly professional terms? But when the angry, treacherous King of the Fairies shows up, can Marilee become his champion?

John commented on the décor when he stopped by after school. I stood up from painting the wood paneling where it met the inside of the staircase, stepped back to check my work, and bumped into him. “It looks nice,” John said simply, catching my elbow and steadying me.

“Thanks.” I smiled at him. Standing one step up, I was eye level with John. It was a potentially intimate moment, and I watched him carefully to see some spark of interest, but I was disappointed. He examined the stairwell, frowning, and didn’t seem aware of me at all, but his next statement seemed genuinely remorseful.

“I’m sorry I can’t be here to help more. You’re getting stuck with the painting after all.”

I shrugged. “It was inevitable. I did something bad in a previous life.”

I studied him more closely. John had recovered from his earlier fall, but he looked pale and thin. Tiny frown lines were etched between his eyebrows, and there was a drag along the lower line of his jaw that worried me.

“You skipped lunch again, didn’t you?” I blurted out. “You can’t do that and ride that bike. You know that!”

John grimaced and peered at me through one eye, the other squinting. “I had meetings.”

I was torn between laughing at his Popeye look and cringing at how much I sounded like my mother. “You couldn’t eat a granola bar or something in them?”

John shook his head. “I did, I did. I used my lunch hour to call the bank . . .” His voice trailed off and he looked away, anywhere but at me.

“Uh-uh.” I reached out and grabbed his chin. “What about the bank? Out with it. Don’t leave your employees hanging.”

I let go with a little slap. So much for a professional relationship.

“I’m just trying to refinance,” John explained. “I should be eligible for the federal refinance program. I’ve got mortgage brokers ringing my phone off the hook. I just can’t get hold of anyone at my bank.”

“My bank?” I asked before I realized that it really wasn’t my bank anymore. Didn’t matter. “That’s silly. I’ll speak with Maggie O’Donnell and . . .”

“I didn’t use your bank. I used a national chain at the county seat.” John looked embarrassed at my shocked expression. “Well, I’d just moved here and I didn’t know anyone, but the property was too good a deal to pass up, and . . .” His voice trailed off as he lifted his hands in confusion.

I laughed. “See, this is why you should have gone local instead of with that national behemoth. You’d have gotten real service.”

John made a show of rubbing his cheek. “Kind of like the personalized service I’m getting now?”

I laughed, but a worrying thought came crowding in on the heels of his joke. “John, you’re not having, well, financial troubles, are you?”

“No, no, it’s fine. I’m just trying to get us some wiggle room. Expenses are adding up fast.”

I winced. “I am sorry about that. I’m really trying to keep a lid on costs.”

“It’s okay.” John grinned and leaned into me. “It’s embarrassing, really. I’m a mathematician. I thought I’d covered this.” Then he straightened up and stood transfixed, looking over my shoulder.

I turned to see what he watched and became aware of a low thumping sound growing louder and faster. A ball rolled into view at the top of the stairs, seemed to hesitate for a moment, and then gaining momentum, hurtled down the stairs. Then suddenly behind it came balls of all shapes and sizes, all thundering down the steps in a rolling, bounding, bouncing wave of athletic enthusiasm.

John and I both stood silent for a moment, staring down the stairwell after the swell of spheres surged past. Then John swung around to me, eyes wide. “What was that?”

I shrugged. “I think that was the box Mom found in the barn. It was full of old athletic gear. I thought I put them back.”

John looked warily from me down the stair and back again.

“Hey, you were the one who told her she could decorate,” I added, but gently. I didn’t know quite how to react. I didn’t actually believe in ghosts or whatever. I would have said a haunted house wasn’t possible, but an avalanche of athletic spheres had just thundered past. However, since it seemed to have missed the wet paint, I would not panic and assume anything bad was happening in the house.

John nodded and smiled. “You’re right. I’ll go pick them up. It’s the least I can do.”

“That’s the ticket,” I called after him. “Pitch in and get the job done. You can do it.”
© Kathy Bryson

Kathy Bryson knew she wanted to be a writer when she finished reading through her school and local children’s libraries. She spent 20 years honing her writing skills on marketing brochures, websites, and several unfinished manuscripts before going into teaching and finishing a book with all the stuff she enjoys most – from coffee to love to Shakespeare! Kathy lives in Florida where she caters to the whims of two spoiled cats and wonders what possessed her to put in 75 feet of flower beds.

of an ebook from her backlist +
a Rocker cham bracelet!!!

of Araya’s Addiction away to two lucky commenters!

an ebook copy of Restless Spirits!