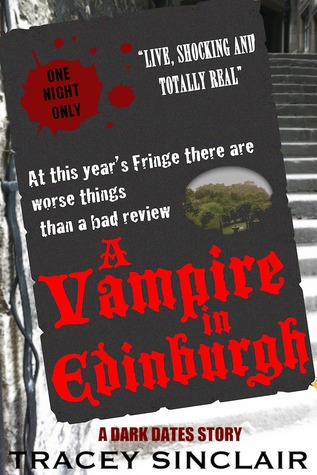 Soooo I sent out the Kat Signal 😀 to ask authors/bloggers for help with content for my blog. I’m beaming at the generosity of the book community. Thank you! (I’ll be emailing ya’ll to arrange visits!) BUT the very first offer of support was from author Tracey Sinclair. I adore this girl. She writes the delicious, smart, sexy urban fantasy series the Cassandra Bick Chronicles and she has sent me a couple goodies to share here on The Book Tart. The first treat is an excerpt from A Vampire In Edinburgh.

Enjoy! And make sure you enter my Moving Madness Contest. 😀

PS. The FREE Superhero vectorstock is from http://freepsdfiles.net/graphics/superhero-vector-character-set-1 🙂

Jesus, thought the angel, looking around the crammed, foetid  dungeon. This really was hell. Why did people do this to themselves, he wondered, knowing they would end up somewhere like this? What was it that drove humanity to such folly, that they would fall so far? Then again, he supposed, the tickets had been pretty cheap.

The angel who went by the name of Cain took a long slug of lukewarm lager, staring at his plastic glass with undisguised resentment. In the olden days – which, to a creature of Cain’s lifespan, didn’t actually feel like that long ago – humans had swarmed to amphitheatres to watch their fellow creatures tear one another to pieces, to cheer as those whose only crime was to worship a different god were torn apart by beasts. He supposed, in the grand scheme of things, that paying a tenner to watch something called fringe theatre in a cramped hole that smelled slightly of vomit and under-performing deodorant was progress of sorts, but right now it didn’t seem like it. At least at the amphitheatres you’d been able to get a decent drink.

In fairness, Cain also had to admit that this wasn’t, strictly speaking, a dungeon, either, and he was in a position to know, having seen more than enough dungeons in his time to make a fair comparison. Edinburgh was a city blessed with an abundance of vaults and cellars, and this one had presumably once served as a storage space of some sort, which accounted for the fact it clearly wasn’t designed for habitation, so managed to be both stiflingly hot and dank at the same time; he could see condensation clinging to the stone walls, and he kept his hand over his drink, lest the moisture dripping from the low ceiling watered down a beverage that already tasted suspiciously pre-enjoyed. Looking around, though, most people didn’t seem to mind. The cellar was packed with punters, the array of people that even after only a couple of days he recognised as standard Festival-goers. A bunch of shrill, braying, ex-public schoolboys stood perilously near to him, their laughter getting louder the more they drank, while around them milled a motley assortment of tourists looking for cheap entertainment, actors there to support or malign their competitors, and a huddle of whey-faced individuals who Cain had come quickly to identify as reviewers, easily spotted by the shell-shocked expressions of those who not only had to sit through hours of this crap every day for the month-long duration of the Fringe, but also then write something coherent about it; almost uniformly they sported the unhealthy complexions of people who hadn’t been outdoors in days and were subsisting on a diet of cheap wine, strong coffee and chips. Several were dazedly consulting notepads, as if checking what they were actually here to see, which Cain had some sympathy with: he had been in the city less than 72 hours and was already starting to know how they felt. There was also a smattering of what Cain believed were called Goths, though with their hair frizzing in the humidity and their eyeliner running in the heat they looked a pale – ha!, he thought, darkly amused – imitation of their namesakes. Cain had run into a few Visigoths in his time, and he couldn’t help wonder what they would make of the fact that their legacy had been to label a bunch of over-sensitive teens with a taste for dreary music. Not that big on sensitivity, the Visigoths, as Cain recalled. Still, it meant he’d come to the right place.

The Goths, he assumed, were drawn by the same thing he was, though he imagined they had a very different purpose in mind. Unfolding the cheaply printed scrap of paper from his pocket, he scowled as he read again about tonight’s ‘entertainment’ – ‘No, No, Nosferatu!’ it exclaimed (he had learned quickly that exclamation marks were considered almost compulsory at the Festival), promising ‘A macabre musical masterpiece with a soupçon of sinister farce’. Cain wasn’t even sure he understood what some of those words meant, but none of them sounded good. Then a thin, lanky boy, stooping under the low roof, moved aside, and something caught Cain’s eye. All of a sudden, the game had changed.

Tracey Sinclair works as freelance copywriter, editor and legal directories consultant. A diverse and slightly wandering career has included writing factsheets for small businesses, creating web content for law firms, subtitling film and TV and editing one of the UK’s largest legal directories. A keen blogger, she regularly writes for online theatre site Exeunt and science fiction site Unleash the Fanboy and her blog Body of a Geek Goddess was shortlisted in the Cosmopolitan Blogger Awards 2011. Her work has been published in a number of magazines and anthologies and her short play Bystanders was premiered in 2011 as part of the CP Players New Writing Season at Baron’s Court Theatre, London. She has published two small press books (Doll and No Love is This, both Kennedy & Boyd) and is now dipping a toe in the digital self-publishing world with her new urban fantasy novel, Dark Dates.

Release date: Nov. 7, 2012
Tracey Sinclair (Author)
ASIN: B00A3SVOOU |
Format: eBook
The hunter just wanted to be left alone – one last drink before leaving London forever. Then the vampire Laclos walked into the bar, and suddenly his night wasn’t looking so quiet after all…
There’s a new hunter in the city and he’d targeting Dark Dates – the vampire/human dating agency run by Cassandra Bick, who also happens to be the woman that both Cain and Laclos love. These two fierce rivals must work together to stop him before he drags London’s vampires into the spotlight and destroys Cassandra’s life – that’s if they don’t kill each other first.
Explore a darker side of London with this exciting short story from author, Tracey Sinclair. The first novel in “The Cassandra Bick Chronicles”, “Dark Dates” is out now
Buy this ebook from: Amazon | Amazon.uk

13 Replies to “Saving The Book Tart- Excerpt from Tracey Sinclair’s A Vampire In Edinburgh + Contest!”