I love urban fantasy! When I read the blurb for Paul Anthony Shortt’s novel Memory War I immediately added it to my TBR mountain and joined the book release party! I also adore book birthdays… so this is perfect. 😉 Take a look at Memory War and enjoy the excerpt. Oh! Make sure you enter Paul’s contest too. 😀 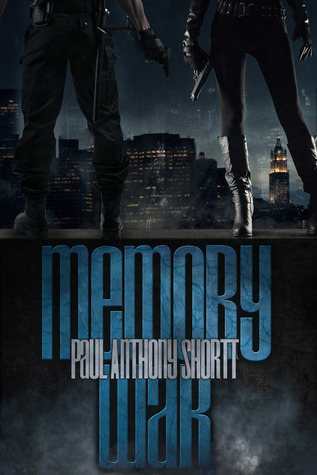 Athamar returns, plunging the city into chaos. Uniting the forces of darkness against Nathan and his allies, Athamar strives to discover a secret hidden for thousands of years. A secret lost to Nathan’s memories. Something so dangerous, even the gods themselves fear it.

Nathan and Elena were once the greatest of heroes, champions against evil. Now, haunted by Nathan’s past-life betrayal, they must work together and brave the pain of long-buried lifetimes. Somewhere, locked within their former incarnations, lies the key to stopping Athamar, an enemy who has hunted them from one incarnation to the next.

As the city burns and innocents suffer, as heroes fall and hope dies, Nathan and Elena face their final battle, a battle where legends will be reborn.

Tuxedos were the worst. At least in the Roman Empire, the Middle Ages, even during the Renaissance, clothing, men’s especially, was designed to allow enough freedom of movement to fight or defend oneself. The 21st century had long seen the end of that. Nathan Shepherd’s feet blistered in polished shoes. He was sure they were too small, despite what the man in the rental store had said, and found himself longing for a practical form of battle dress which would also go with black tie events.

He scanned the ballroom as he descended the marble steps. The scent of expensive perfume drifted across the air, accompanied by the gentle sway of a string quartet on the stage. Tugging at his collar, Nathan walked to the buffet table and plucked a glass of champagne.

“Champagne’s not bad,” he said, softly. “Not sure about the caviar though.”

“You’re supposed to be watching the mayor.”

“I’m getting into character.”

“Well listen, 007, we’ve got four people who just went in through the kitchen door and one of them looks a lot like Lucius.”

Lucius was a vampire, one of the top-ranking enforcers for the Council of Chains. He’d been seen on the street a lot since Dorian went missing last year.

“Were they armed?” Nathan asked, sipping the champagne.

“Couldn’t see,” Cynthia replied. “Nothing big, at least. No heavy bags or boxes that could conceal large amounts of weaponry.”

“How are they going to do this?”

“Poison?” Cynthia said. “That’s how they got the chief of police.”

“Difficult,” Nathan said. So many people were taking hors d’oeuvres and drinks from tables and passing servers that it would be impossible to predict what the mayor would take. “Unless they poison something other than the food,” Nathan said. He frowned. It was something to watch for.

“What else is there?” Cynthia asked. “This is too big for a bomb or a shooter.”

“Keep me posted on anything suspicious entering or leaving the building,” Nathan said, sipping his drink and wandering along the dance floor. The crowd on the dance floor parted and he saw the mayor speaking to a group seated at a table.

“I have him,” Nathan said. “Tommy, what’s your status?” This was Tommy’s first time in the field, and he was doing everything he could not to seem nervous.

“Uh, restroom,” his voice came back through Nathan’s earpiece.

“You’re supposed to be by the stage.”

“Sorry boss,” Tommy said. “Must have been the crab meat crackers.”

“I’ll do my…” The sound of Tommy’s voice was replaced by retching and the splash of liquid hitting liquid. Nathan’s stomach turned a little.

“Just give me a minute,” Tommy said, coughing.

Movement caught Nathan’s eye. Four men moving through the crowd, shoulders set back and arms loose. They were ready to pounce. “I don’t have a minute.” Where was Lucius?

One of them nodded across the ballroom. Nathan turned to follow the gaze and spotted Lucius emerging from a staff door. Nathan set his glass down and started across the dance floor.

Then he saw her, flowing across the floor in a backless scarlet dress, split along the sides to reveal her sculpted calves and thighs. Three ebony hairpins held her long black hair in a coiled bun, leaving only a few tantalising locks framing her face. She turned and narrowed her eyes. He wondered how many other people would have been able to spot the marks on her arms and back where she’d used make-up to cover her scars. Marks earned in battle. Nathan’s gaze drifted of its own accord, up each curve from her hips to her neck, settling for a moment on her blood red lips and wide, practiced smile. Her sea green eyes fixed him and she advanced, sweeping toward him and locking her arms around his shoulders.

“Making sure you get out alive,” she said. Her smile never faltered. She pulled Nathan into the crowd as the musicians started up a new piece.

“I don’t have time to dance.” He tried to pull away, but Elena held him firm. Nathan placed his hands on her hips and pushed, but she pressed herself against him. He shivered and inhaled her perfume.

“You have four behind you,” she said, “and another four coming from the staff entrance.”

“I know,” he said, leading her across the floor in time to the music. “Lucius is leading them. It’s a Council hit.” He glanced to the side. “Two more on your left, dancing.” They moved apart, keeping their steps in perfect rhythm.

Elena flicked her eyes around. “Three by the stairs. Just you?”

Nathan shook his head as they closed in together again. “Tommy’s inside. Cynthia and Cadence are watching from the next building. Sue’s got the truck waiting.”

“You should have Cadence in here,” she said.

Nathan smirked and dipped Elena, gazing down at her.

“That’s the wrong step,” she said.

Nathan felt the energy in the crowd shift. A forgotten sense most mortals possessed, but which only those regularly exposed to the supernatural were aware of, allowed the detection of emotional energy and even the presence of supernatural creatures and magical effects. The crowd was nervous. Eyes moved to Nathan and Elena. People backed away. One of the men approaching from behind Elena flashed a grin, showing a pair of long fangs.

Elena nodded and reached for one of her hair pins. Nathan pulled her back up and she threw the pin. It flew straight into the heart of one of the Council agents. Nathan ignored the scream and delivered a side-kick to the sternum of the vampire behind Elena.

“Tommy,” Nathan yelled into his radio. “Where are you?”

Nathan spotted him pushing his way through the crowd as two more vampires moved in on him and Elena. They fought back to back. Elena kicked off her shoes and used another hair pin as a close-range stabbing weapon. Nathan blocked a wild punch and twisted the vampire’s arm, breaking it at the elbow joint. The vampire yelled and Nathan spun, hurling him against the buffet table.

A female vampire leaped onto Nathan’s back. Her hiss closed in on his ear as she reached for his throat. Nathan reached around to grab her, but another vampire kicked him in the stomach.

Tommy tried to push onto the dance floor, but the crowd was too thick and panicked.

“Cadence,” Nathan said, struggling to breathe as the woman on his back tried to strangle him. “Now.”

A window smashed inward as a rolled-up black wrap flew through the air. It landed close to Nathan and fell open, revealing the hilt of his sword.

The woman on Nathan’s back seized and shrieked. Her grip loosened. Nathan spun his hips and threw her off. One of Elena’s pins stuck out of her back. These vampires weren’t dying immediately upon wood piercing their hearts. That meant they were older; more powerful than the average street vampires. They’d need their heads cut off or their bodies burned to finish them off for good.

Nathan dove for his sword, snatching it and slashing the next vampire’s leg. He rolled to his feet and swung down as the vampire’s fingernails grew into long black claws. Its hands fell away and the vampire shrieked, running from Nathan.

Elena reached for the roll of weapons and took two small curved axes. Five vampires surrounded them. Nathan pointed for Tommy to get to the mayor and he nodded, running to the stage. The vampires pounced.

Nathan and Elena reacted as one, fighting off their attackers with precision and unity honed over a hundred lifetimes. Dark blood splattered the dance floor as they cut down the vampires one by one. With every heartbeat, Nathan felt Elena’s soul pulsing and his own respond in kind. They breathed in unison, feeling what the other felt, seeing what the other saw. It was in this, the work of performing death, that their last true bond remained. Nathan was almost used to the regret. It urged him on, giving him power, bringing forth memories of past-life battles to fuel his strength and speed. He reached into those memories now, plucking one from the chaos and taking his past-self’s adrenaline to keep his mind focused on the task at hand. There was no room for mistakes here.

A child at heart who turned to writing and roleplaying games when there simply weren’t enough action figures to play out the stories he wanted, Paul Anthony Shortt has been writing all his life.

Growing up surrounded by music, film and theatre gave him a deep love of all forms of storytelling, each teaching him something new he could use. When not playing with the people in his head, he enjoys cooking and regular meet-ups with his gaming group.

He lives in Ireland with his wife Jen and their dogs, Pepper and Jasper. Their first child, Conor William Henry Shortt, was born on July 11th, 2011. He passed away three days later, but brought love and joy into their lives and those of their friends.

The following year, Jen gave birth to twins, Amy and Erica. Their fourth child, Olivia, was born in January, 2014.