I am delighted to help shout out about Chrissy’s new release. 😉 Check out C. A. Szarek’s Calculated Collision. She writes heart pounding romantic suspense with characters that feel real and grab hold of your heart. Enjoy the excerpt too! 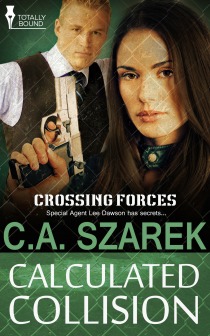 Special Agent Lee Dawson has secrets. Secrets that forced her from Dallas to New York City in disgrace two years ago.

Dallas County Assistant District Attorney, Nate Crane, visits New York and witnesses the brutal murder of a friend. When Lee is assigned to the investigation, her personal and professional life collides. She can’t avoid the man she ditched six months ago.

She’s the one Nate can’t stop thinking about. The one he let get away. He’s determined to get her back, no matter what she thinks she wants. Being a witness in her case puts them close—and Nate intends to keep it that way.

After Nate’s attacked at a safe house, Lee knows there’s a leak – a dirty FBI agent working with the human trafficker her unit has been hunting for years.

Can Lee protect her witness and resist the heat between them or will she succumb to her desires and throw them both into danger?

Sweat broke out on her brow and Lee gripped her Glock tighter instead of wiping the moisture away. She bit back a curse.

She hated being in the back. Being back-up.

Lee and her partner, Clint Downs, were the lead agents of their unit, and usually headed raids.

Nothing wrong with the passenger seat, right?

Maybe if she kept telling herself that, it’d sink in.

Hard and fast was all Lee knew. How she got the job done. But even her partner had reminded her there were twelve members of their human trafficking unit. They were all partners.

Ugh. She’d rather hang a ‘Doesn’t play well with others’ sign around her neck.“You good?”

Her partner’s gravelly voice made Lee tense. “Yup.” She didn’t look his way.

“I’m good.” Flexing her fingers on her gun’s grip, she inched forward. “Wanna get this done.”

Downs didn’t have a chance to answer. The battering ram exploded the door in front of them and wood splinters went flying.

Collective shouts of “Federal agents!” coupled with “FBI!” surrounded her and she rushed forward behind her teammates. In correct formation, head in the game.

Screams and whimpers greeted her ears. Her heart used to jump with the fears of the victims every time they did a raid, but not anymore. Instead it was steel, and her gut made of iron.

Lee was used to seeing tears, and hearing them cry. What she’d never get used to were the bruises and skimpy clothing on kids that were less than half her age.

Most weren’t even sixteen, yet in a lot of cases they’d been bought, sold and forced to have sex with more pieces of scum than she could count. The lucky ones got owners that didn’t beat them, but a sex-slave was still a sex-slave.

Bastards. They all needed to die.

The relief on the girls’ faces when they first realised they were being rescued was always a reward. Reminded Lee she was a good person—why she did the job. If only the sentiment lasted in her mind.

A shot rang out and her instincts kicked in. She dropped to the dingy carpet and rolled to the nearest cover—a dark-coloured couch.

Lee smirked and raised her Glock. “Nah, we got this.” She popped up over the couch for a quick survey. A bullet whizzed overhead and her partner yanked her back down.

When he flashed his perma-scowl, she almost rolled her eyes. How many times had he said that?

Orders to drop weapons went unheeded as more bangs made her ears ring. She risked another look over the couch. Other members of their unit had taken cover, but several were returning fire.

One of the girls screamed again and Lee’s gaze darted that way. Three—no, four—teens were huddled in a corner, arms wrapped around each other, but they were out of the line of fire.

Today’s group of fine, upstanding human traffickers was made up of illegals from Mexico. Lee and Downs had been after these guys for months. The fact they’d hooked up with Tony Caselli’s outfit was dumb luck.

The other object of today’s raid—Giovanni Nicci—was shooting a big .45. One of the assholes he was supposed to sell girls to lay in a pool of blood about five feet from him. Dead Mexican’s partner returned fire next to Nicci.

If—no, when—the FBI gained control of the situation, their unit would score double. According to the morning’s intel, Nicci was supposed to be meeting up with Russians. They’d have to find out why there’d been a change in plans later. It had to mean something.

Lee took a shot, hearing her partner curse next to her. She ignored him and pulled the trigger again.