I adore cover reveals. I am a cover whore. There. I said it. I do often judge books by their covers. 🙂 Check out the delicious cover for Charity Farrell’s upcoming new adult novel Beneath Our Stars. Mmmmm I also love this tag line “Can the tragic ending of a first love end up being the beautiful beginning of another?”

“I might not have pulled the trigger, but I could have stopped the bullet from hitting him.”

Daisy Mara had the perfect life: a boyfriend she’d eventually marry, friends she would do anything for, and the beginning of her senior year. All of that changes in an instance when a shot rings through the air, shattering her heart into pieces. Unable to cope with her loss, her parents force her to move thousands of miles away for a fresh, new start. The last thing she expects to see her first night in her new home is her new neighbor, naked and in a very compromising situation.

Keegan Montgomery never had to answer to anyone for anything. His life consisted of partying and frequenting as many beds as he could throw himself into. But under his bad boy facade, he is facing his own internal demons.

Daisy knows she will never belong to another.
Keegan knows he will never love anyone – ever.
But their attraction is undeniable.

Can the tragic ending of a first love end up being the beautiful beginning of another? 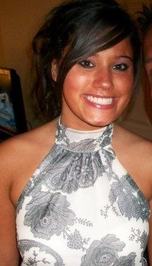 Charity Ferrell was born and raised in Indianapolis, Indiana and still resides there with her future hubby, two Yorkies (who run the house), and cat. When she’s not writing, you can find her reading, spending time with her crazy family or watching too much TV.