Ha! I am tickled pink to have Shannon Stacey, aka Shan (because we know her a bit more) 😉 , at The Book Tart to spread the word about her brand new romance, Taken With You.
AND ,cause I asked, she’s opening a vein to spill the details on the Top 10 Things That Scare Her. I told her I was scared of spiders. She’s not scared of spiders but she was able to come up with 10 things that do give her the heebie-jeebies.  What scares you?
(((hugs))) Kat
The Queen of Tarts
PS. Make sure you enter her contest!

Things That Scare Me

Only ten? I’m a person afraid of many things. Strangely enough, that doesn’t include spiders, which I like to catch and release outside. (Unless they’re in the bathtub. My hospitality has limits.)  And I’m a wife, mother, daughter, etcetera, so I’ll skip things like phone calls in the middle of the night and high fevers because they’re obvious and not very fun. What else scares me?

10.  Escalators. Since I’ve started attending romance conferences, which are often held in giant hotel convention centers that love escalators, I’ve gotten slightly better at navigating them, but they still terrify me. I often end up pawing at the ground with my right foot like that famous counting horse, trying to time that first step in such a way the escalator won’t eat me.

9. Ladders. Strangely enough, it’s not related to a fear of heights. We have a two-rung step ladder that scares me. If I absolutely have to use it for something, such as changing a light bulb, my legs start to shake as soon as I step onto it. I was once made it halfway up an extension ladder, spurred on by my husband’s mocking. but then I froze. Once he’d stopped laughing so hard he couldn’t breathe, he had to rescue me.

8.  Being called “Shannon” by people who know me well, especially by friends and family. I know. Being scared of one’s name is a wee bit odd. But I was raised with nicknames—Shan, Peach (my mom), S**thead (my dad), and so on. If somebody called me Shannon, he or she was angry with me and, though I’m forty-one now, hearing my full name still spikes my anxiety level.

7.  Space. Not aliens, just the vast, undefined concept of space and this planet being nothing more than a speck. I can watch space movies like Armageddon, which is one of my all-time favorites, but if people start having a real-life conversation about space and asteroids and sun flares and dying stars, I’m out.

6.  Things touching my neck, like tight turtlenecks or necklaces with a short chain. Even certain T-shirts will bother me and I’m constantly yanking on the neckline. I was told once this fear means I was hung or strangled in a past life. I think if fears that aren’t grounded in a current-life incident stem from past-life incidents, I’ve been some really weird people!

5.  Right now I’m suffering from an acute fear that I’m not afraid of as many things as I thought and won’t come be able to come up with ten.

4.  I’m afraid of being pushed down the stairs, though this has never happened to me. (Not in this life, anyway.) Unless it absolutely can’t be helped, my husband is usually the only person I can tolerate being behind me as I go down a staircase.

3. Geese. Geese are devil birds that fill me with terror. This fear, however, comes from an incident in this life. When I was a little girl, I had a knit hat that tied with long strings that had pom-poms at the end. We went to a pond and there were geese and I was gently urged to approach them because aren’t the giant, wing-flapping, squawking birds pretty? One jumped up and clamped its beak on my pom-pom and wouldn’t let go. I was screaming and flapping my arms and it was flapping its wings and…I give geese a wide berth.

2.  Earwigs (AKA pincher bugs). I already mentioned I’m not afraid of spiders. Bugs of any sort don’t really bother me all that much. But earwigs? There’s screaming and the knocking over of chairs and running around and more screaming and then the grinding of the offending earwig into oblivion. I blame Star Trek II: The Wrath of Khan. (You know the scene.)

1.  My number one fear also finds its origin in a movie, though I don’t even remember the title. The Deep, maybe? There was a voodoo scene I was not old enough to be watching and…I’m afraid of chicken feet. Not chickens. Just the feet. The last time I was exposed to a chicken foot (there were several, actually), I blacked out and the next thing I knew, I’d locked myself in a van. I’m told I sprinted across the yard and Olympic-style hurdled one of those black metal fences with the spear tips for decoration. If you knew me, you’d know it takes a lot of fear just to make me walk fast. I didn’t know I could sprint.

So there you have it, my list of ten (very weird and often inexplicable) things that scare me. Now that I’ve bared my scaredy-cat soul, tell me—what are YOU afraid of?

Thanks for inviting me to visit today, and happy reading! 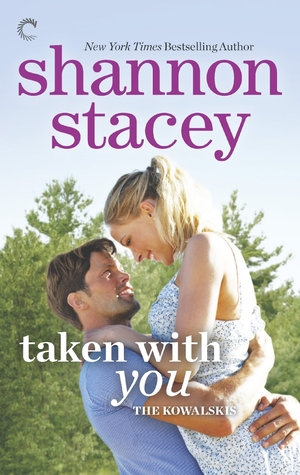 Hailey Genest has seen most of her friends marry and have babies, and she’s happy for them, but it was a lot easier before she hit forty. She’s spent her entire life in Whitford, Maine, and if she hasn’t found her Prince Charming by now, she has to accept she’s probably not going to. When a new friend suggests they go on an adventure and embrace being single, Hailey agrees.

Surviving in the woods is game warden Matt Barnett’s idea of a relaxing vacation. But when he meets two women in need of help, he leads them back to safety – a task that proves more fun than expected, thanks to a certain hot blonde. He can’t resist pushing her buttons, even though she’s made it clear that the rugged, outdoorsy type just isn’t for her.

Hailey is glad to see the back of her tempting-tour-guide-slash-pain-in-the-ass. When he shows up in her life again, she’s determined to avoid him, no matter how good he looks in his uniform. But that’s easier said than done in Whitford, especially when he’s renting the house right next door…

April 2nd
–Escape Into A Book >>  Review
–Been There, Read That, Reviewed The Book >> Review New York Times and USA Today bestselling author Shannon Stacey lives with her husband and two sons in New England, where her two favorite activities are writing stories of happily ever after and riding her four-wheeler. From May to November, the Stacey family spends their weekends on their ATVs, making loads of muddy laundry to keep Shannon busy when she’s not at her computer. She prefers writing to laundry, however, and considers herself lucky she got to be an author when she grew up.

Who: Open to US and Canada:

3 Replies to “Top 10 Guest Post by Shannon Stacey + Spotlight on Taken With You + Contest!”