I had trouble deciding between the hot excerpt from A. Rosa’s debut novel Emotionally Compromised or her blog post on writing her heroine Alex. I went with the guest post because her main protagonist intrigues me. I want to get to know Special Agent Alex Turner and see how she handles what the author dishes out. 😉 Oh! Make sure you enter the giveaways and if Alex peaks your curiosity too then add this book to your TBR list. 😀

Pretty Package With a Bad-Ass Bow.

I had one goal in mind when writing my first novel:

While making it a point to read a lot of books last year, I realized I had pretty much only read Romance —this was an accident, but I found myself such a sucker for the genre. Who doesn’t love: girl-meets-boy, girl-falls-in-love with boy? *Fans-self* “Oh-Oh! ME!”

However, there was something frustrating about half of the books I read.

Their leading lady was flimsy, and at the whim of her leading man. The build of her confidence would be slow, and overwhelmingly frustrating to me, and all I thought was:

When does the girl get to take the wheel on this weird road of love?

Well, the truth of the matter is, men never let woman drive.

I needed to change that.

Finding that my first novel fit nicely into the genre of “Romantic Suspense” I found a home for my gun-wielding, witty main character, Special Agent Alex Turner, who’s lack of patience was a perfect characteristic for a woman who made her own destiny rather then simply let things happen.

A main character perfectly flawed, but driven to do better, especially when it comes to matters of the heart. Not to mention I wanted my main character to have the emotional range of a teenage boy, because let’s face it, not all girls know what the hell to do with their emotions.

Okay, I must confess something though, because my main character is not only emotionally underdeveloped, but a federal agent; trained to kill on a whim, her morality hits a grey area constantly when it comes to the value of a human life, and on top of everything else she openly prefers her gun to a boyfriend.

So, is she an impressively strong female lead, or an emotional nightmare? I like the dichotomy.

This is why I fell in love with the idea of this novel.

You’re suddenly being lead by Agent Turner, and you want her to succeed in a myriad of different ways. In Emotionally Compromised, she struggles to do her job, somehow manages a potential love interest, while at the same time keeping her sense of self, and doing the right thing —whether that means pulling the trigger, or taking down her emotional wall to do something as simple as telling her boyfriend how she feels. She’d argue pulling the trigger might be easier.

With Emotionally Compromised I wanted a pretty package with a bad-ass bow to place on top of it. I wanted a fluid combination of personal growth, wonderfully complicated emotional range, and heartfelt struggles of a powerful woman that could kick the butt of the average female lead.

I think I might have done it, and I hope the readers think so too. 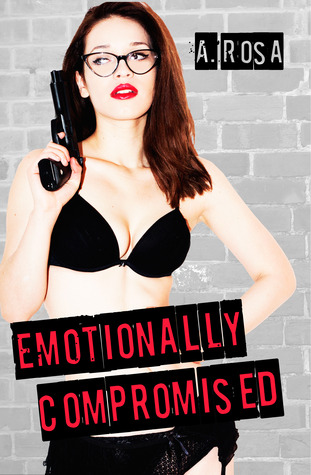 Federal Agent Alex Turner deals better with guns than boyfriends, and prefers it that way. Her emotional range is bleak, but her aim is damn near perfect.

Thinking saving the world is a far easier task than dating, Agent Turner springs at the opportunity to prevent young scientist Marcus Gibbs from selling his biological weapon to the highest bidder. With her goal in sight, and Marcus eating out of the palm of her hand, an obstacle she doesn’t see coming interferes. Meet Jeremy Hunt — the distractingly handsome CEO of Sunscape Biotechnologies, and Marcus’s boss and best friend.

A man who is accustomed to getting what he wants, Jeremy’s never been one to take no for an answer, which has Agent Turner realizing for the first time that her wit might get her farther than her weapon. With no protocol or training to reference when it comes to matters of the heart, she worries that this might be her hardest assignment yet.

♥ Buy this Print book from: Amazon | 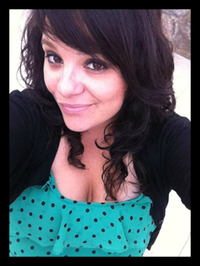 A. Rosa lives in San Diego, California. When she isn’t scouring city parks or cafe’s to write she is more than likely trying to convince her friends to join her on her next adventure. A sufferer of wanderlust, she is always looking for a new mountain to climb, a canyon to hike, or a plane to board. Her resume consists of coroner, to working at a zoo, and most recently as an executive assistant, but finds her home amongst words, whether it be in books, or in film. Her obsessions are on the brink of bizarre, but that’s just the way she likes it.

What: one winner will receive an

The brand I’m currently in favor of is from Sephora

But for not fancy I love cherry chapstick of course

4 Replies to ““Pretty Package With A Badass Bow” Guest Post by A. Rosa +Spotlight on Emotionally Compromised + Contest!”