Ha! I adore this girl! Check out Cecilia Gray’s guest post  on Meeting Jane Austen… and being yourself. I love the GIFS and her experiences made me snort and nod. 🙂

I adore Jane Austen too and I’m thrilled to spread the word about Only With You, book 5 in Cecilia’s The Jane Austen Academy Series. It’s Emma’s story!

(((hugs))) Kat
The Queen of Tarts
PS. Make sure you enter awesomesauce tour contest! *snork* The prize, while great, is very Emma-ish in it’s delivery. 😀

I was fourteen years old when I spent a few weeks backpacking through Europe with my best friend. We slept in hostels, camped in the woods, and took up residence at pool houses within gorgeous Oceanside villas.

Along the way, each stop had a small collection of books with the same suggestion (although written in French or Italian, usually): if you like a book, take it with you and when you’re done, leave it for someone else to read.

I picked up a few books this way, including a collection of Jane Austen’s six novels. I read through them over the course of two weeks and fell in love – not really with Darcy and Knightley (although they weren’t bad) but with Elizabeth Bennet and Emma Woodhouse in particular.

I had just moved schools (away from my best friend, le sigh), and whereas in my old school I had been well-liked and popular, I was having trouble fitting in with my new town.

It’s really easy to know when you aren’t fitting in. Because:

(2)  No one wants to be in your group during lab or group work, and

(3)  Whenever the people around you are talking about what party they are going to over the weekend, you have no idea where it is located.

Before then, popularity had always been a pretty easy gig for me up until then. I was competitive and whereas at my old school – where competition was welcome because we all wanted to be the best – at my new school it was frowned upon. This wasn’t the case anymore. In my new school, I was considered too sarcastic, too harsh, and incredibly snobby.

I had been, up to that point, toying with the idea of changing myself to fit. I could try to hold back more, challenge people less.

Thank goodness for Jane Austen, because by the time I finished her books I was convinced of one thing: as long as I am not being cruel or mean, I should be myself. Anything else was a waste of everyone’s time.

I did not become popular. (Big surprise.)

But I did find my tribe – a group of like-minded girls who were a lot like me. Not in every single way – that would be boring. We ran the range of being athletic vs brainy vs musical, but we all got each other.

If you’re a fan of Jane Austen, you might think it’s weird to read her books about class systems and difficult parents and long, pastoral walks in the English countryside and come away with the message that it’s okay to be a go-getter.

But that’s the beauty of Jane Austen. Everyone who meets her finds something different to love. 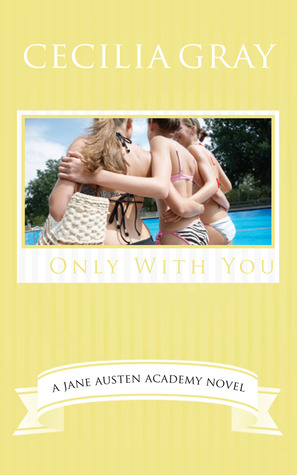 Dive into the fabulous, fun lives of six Academy girls as their friendships are tested, torn and ultimately triumph…

Emma has it all – looks, money, and luck. It’s not like she keeps it all to herself – she’s totally committed to helping those less fortunate. AKA, everyone. She invites her heartbroken friend to help with a weekend charity event with an eye to matchmake, but when that friend turns her eye toward the guy Emma wants for herself, how will she choose between friendship and her own feelings?

The last thing that the girls at the elite Jane Austen Academy need is hot guys to flirt with. But over the summer the school has been sold, and like it or not, the guys are coming. And it’s about to turn the Academy—and the lives of its students—totally upside down…

Cecilia Gray lives in the San Francisco Bay Area where she reads, writes and breaks for food. She also pens her biographies in the third person. Like this. As if to trick you into thinking someone else wrote it because she is important. Alas, this is not the case.

She’s rather enamored of being contacted by readers and hopes you’ll oblige.

A book giveaway of the author’s choice to the winner based on her perusal of their Goodreads shelf (because just like her heroine, Emma, she think she know what’s best for everyone. 😉

Who: Open to International Entries too 😉

5 Replies to “Meeting Jane Austen guest post by Cecilia Gray + Spotlight on Only With You + Contest!”