I’m back!
I know *head/desk* long time no post. 🙁
I took the summer off to spend time with my Bookstore Beau before he left to work overseas…. soooo I’ll try better not to be a stranger! I’ve missed blogging and all my book loving friends!
I’m excited that my first post is to share with ya’ll about Sheila A. Nielson’s young adult novel Shadow In The Sea . I LOVE this dreamy cover and I’m intrigued by the synopsis…. Check it out and make sure you leave a comment telling us your dream beach vacation destination for a chance to win an ebook copy of Shadow In The Sea!
(((hugs))) Kat
The Queen of Tarts 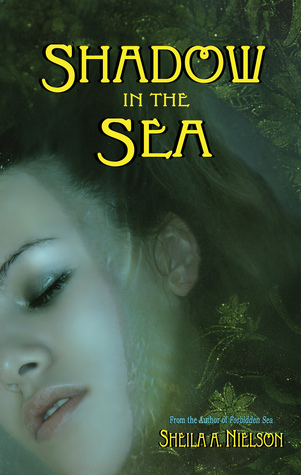 Shadow In The Sea

When sixteen-year-old Sadelyn Hanson washes up on the shores of Windwaithe Island, her beauty and the strange marks on her wrist make superstitious locals suspect she is a mermaid. Feigning amnesia, Sade hides a far worse secret: she was sailing to her own murder trial when she was thrown overboard by the real killer, the cunning and cruel Captain Westwood.

Sade’s quiet effort to rebuild her life on the island is threatened when she meets an actual young merman. Unable to speak his language, Sade still longs for the warm companionship he offers, despite the locals’ dire legends about merfolk and their dark magic. But her confused feelings for the impossible boy become the least of her problems when Captain Westwood’s ship docks at Windwaithe. With nowhere to escape, Sade must trust in the one person who doesn’t fear the merfolk. A woman who had dealings with them herself—years ago.

Shadow In The Sea

by Sheila A. Nielson

I had only gone a few steps when the singing began.

I stopped and whirled, my gaze darting about trying to determine the source of the unearthly song that now wafted through the evening air. It came from everywhere and nowhere at the same time. It started low and rose up in power, like a seabird taking to the air. It resonated off the land and sea, the rocks and cliffs lifting into the endless sky above. The singer seemed to reach down into his core and unleashed a song from the very depths of his soul. His music had no words or language of substance to bind it down. Within his passionate performance I found a moment’s release from the shackles that bound me to this earth. Wings to carry me up into the heights of unfettered joy.

The song was both beautiful and tragic. Wild and yet soothing. It captured my heart even as it set my spirits free. It was as if the angel of deliverance himself called out to the weary world, bracing them up on the wings of his eternal hope. And then it was done. The last echoes of the voice faded and silence fell over the land once more. The air did not stir. The birds ceased to sing. In reverence, the whole island seemed to be holding its breath—waiting.

I never was much for waiting.

Bolting in the most unladylike fashion, I raced to the edge of the cliffs and looked down into dark depths far below, trying to catch a glimpse of the singer responsible for my own private audience. The surface of the ocean was a rippling sea of liquid onyx. Within that blackness was a light. It quivered and pulsed beneath the water like a fallen star. At first I believed it to be a reflection of the moon, or a trick of the light, but the longer I stared at it, the more horribly certain I became that this was no illusion. My momentary joy in the lovely song turned upon itself like a maddened beast. Fear crept into its place.

I’d heard sailors speak of something like this before. Ghost lights they called them. They were said to be the lost souls of those who died in the sea. Seeing one was a harbinger of death.

The light flashed into a fierce brilliance for a moment. I gasped as the welts on my wrist burned with a sudden intensity that made me dizzy. Then it was gone and the fire in my skin retreated as quickly as it came. I looked down into the water with wonder, but the light had vanished, leaving me shivering and alone in dusky darkness.

Sheila never did figure out what she wanted to be when she grew up. She graduated from college with a BFA in illustration, has worked as a children’s librarian for over eighteen years, and would eventually like to be a full-time author. Why pick one career when you can have many? Sheila lives with her two pets, a goffin cockatoo and a tiny toy poodle. She was born and raised in California but has come to also love her adopted home in Utah where she currently resides.

♥ Contest just for The Book Tart! ♥

What: (1) ebook copy of Shadow in the Sea

How: Leave a comment telling us your dream beach destination 😀