This week A.L. Parks celebrated a book birthday! *Snoopy Dance* I love book birthdays. 😀 Take a look at her new release Lauren’s Return, book 3 in her Return To Me series, and enjoy the yummy teasers! 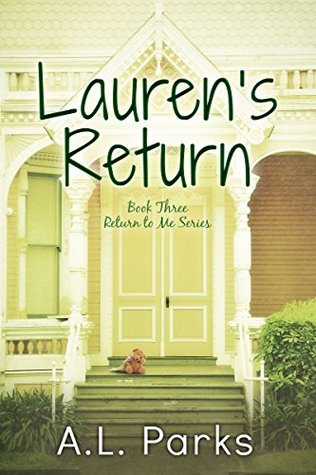 A.L. Parks (Author) |
Release date: August 19th 2014 |
Series: (Return to Me, #3)|
Format: Ebook and Print |
Eve has it all. Deeply in love, she has put her past behind her and embarked on a new career, a new home and a new life with Jake.
Jake finally accepts he can have it all: the love of his life, a future filled with happiness and a woman he trusts with his heart and soul by his side. The only thing he is missing is his thirteen-year-old daughter, Lauren.
But some things are just not meant to be. When Jake’s ex-wife, Monique, feels threatened – she strikes out – and her deadly venom falls on the one person Jake cannot live without.
Jake and Eve are once again in a fight to save their love. But is it enough? Sacrifices must be made, and hearts will be broke, when Lauren returns.

The Return To Me Series

Born and raised in the Rocky Mountains, A.L. Parks has spent the last 25 years moving all over the United States. Married to the
Navy – well a man in the Navy – Parks has lived in various places throughout the United States. Now she resides in the Washington D.C area, and loves every minute. She has four children, and one spoiled German Shepard.

2013 marked her debut in publishing. Her first novel, Strangers, released on her 45th birthday. She was amazed at how many people fell in love with a story about two people dealing with grief, and finding love again. Abby and Bryce were the perfect couple to introduce Parks as an up-and-coming author.

Her second novel, The Return, released in December 2013. A wonderful Christmas romance, it is the first book in a series. Book Two is set to release in Spring 2014.