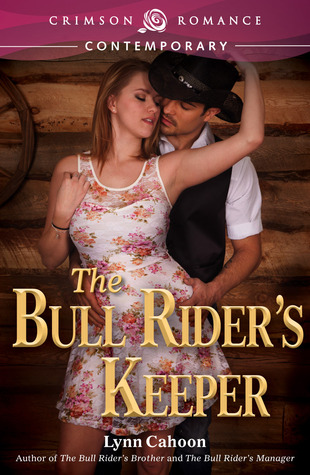 Mmmm mmm yum! I’m delighted to welcome Lynn Cahoon to The Book Tart!  I’m overwhelmed by all the offers of support at my home falling apart and my moving drama. It means the world to me… Everyone is helping me think positive and try to take a moment to just breath… and laugh. 😛

She’s sharing a giggle inducing excerpt from The Bull Rider’s Keeper AND she added an ecopy to my Saving The Book Tart giveaway! I’m a new fan. Plus, I can’t stop smiling at the Neanderthal comment in her excerpt. *points down* See?  😀

Jesse Sullivan isn’t afraid of any thing, any man, or any bull. But when he decides to take a chance and carve out a life outside his rodeo career, he feels like he’s walking on shaky ground. In typical Jesse style, he jumps at a chance to purchase Main Street Gallery, a Boise tradition in the art world.

Taylor DeMarco has two goals for the next year. Getting the gallery on sound financial ground to prove to her parents that she can keep her grandfather’s legacy alive is the first one. Moving out of the house and into her own condo by the Boise River is the second. When she finds her folks are selling the gallery to Jesse, she vows to stop the sale, no holds barred.

When sparks fly between Jesse and Taylor, family gets in the way of reason, and they have to decide what is more important, their desires or keeping Main Street Gallery open and successful.

Time waits for no man, and as usual, Jesse was late. Peeking in the doorway of the class that was supposed to start any minute, he breathed a sigh of relief. Professor DeMarco wasn’t there. He crossed to the next door that led to her office, knocked quickly, then burst in. “Professor DeMarco, I need to leave early today …” He stopped two steps into the room, glancing at the open door for the name plate. Right office, wrong woman. Instead of the elegant art instructor, a very curvy Venus stood in a black bra and lacy black panties, holding a privacy sheet out from her body like she didn’t quite know what to do with it.

Her eyes widened as she realized he was in the room. “Get out of here!” she shrieked. Then, realizing she still held the sheet at arm’s length, she grabbed it and pressed it against her body.

Jesse could have told her it was a lost cause. What he’d seen couldn’t be unseen and she would be haunting his dreams for a while. Instead, he cast his glance regretfully downward and turned around. “Sorry, I guess I should have waited in the hall.”

He was closing the door behind him when he heard her response.

When she entered the classroom a few minutes later as that week’s live model, he saw her gaze stop at his easel for a second. Then she did something that never happened when Jesse met a beautiful woman. She ignored him.

He glanced at his watch: ten to four. He’d promised to be at the airport no later than an hour before his plane left at six. Yet he still sat in front of his easel.

Focusing on the study he’d been working on for the entire class period, he sighed, knowing he’d missed something. The model today was exquisite, a woman who could have been not only Miss Idaho, but also Miss Freaking Universe. Her blond hair fell straight, ending in the middle of a tan, well-defined back. The girl’s body showed a healthy addiction to working out.

He knew the curves that were covered by the privacy sheet, and Jesse felt his body reacting to the view. Not the most professional of reactions for an artist, especially if he wanted to be taken seriously in the art industry someday. He shifted on the stool, his attention falling on her hands. Strong hands that gripped the cloth keeping her covered. The fabric draped around her as if she’d just woken from a night of wild sex. She sat like a goddess in front of the drawing class. Long, slender fingers displayed her nails painted in that weird clear and white thing girls did. He focused on his canvas and, using his pencil, gently added a shadow to the back of the hand.

He tuned into his artist’s eye, noticing the play of light off her straight hair, the gentle curve of her shoulder. Her long, regal neck. Glancing back at his sketchpad, he knew the only things he’d managed to capture from the vitality of this woman were the hands. He’d nailed the hands. A smile curved on his lips as he looked back up at the goddess in front of him to discover her staring back at him.

Heat coursed across the room, his desire hot, his feelings similar to what he often felt when he locked eyes with a gorgeous woman from across a crowded bar. But this, this felt different. His smile faded as hers gently grew. Did she know what he’d been thinking? Hell, he wanted her to know. He wanted to feel those lips against his own, uncover the body only hinted at in the crowded art room. He wanted to possess her. He felt like a teenaged boy looking at his first girlie magazine. No, this was more than youthful attraction. Their gazes locked, and he started to rise from his stool, wanting to introduce himself. To get her name, for God’s sake.

A beeping from his watch broke his focus, and he dropped his gaze for a second. When he looked back, she’d turned her head away, the moment lost.

Jesse sighed and opened his case, putting away supplies. Time to go back into the real world. Time to become Jesse Sullivan, Champion Bull Rider and Professional Bull-Shitter. Eight seconds riding a bull and hours of interviews with reporters wondering why he would risk his life day after day. Wondering who Jesse Sullivan really was underneath that cowboy hat.

USA Today and New York Times, best-selling author, Lynn Cahoon is an Idaho native. If you’d visit the town where she grew up, you’d understand why her mysteries and romance novels focus around the depth and experience of small town life. Currently, she’s living in a small historic town on the banks of the Mississippi river where her imagination tends to wander. She lives with her husband and four fur babies.