Today is Sarah Nicolas’  book birthday! I absolutely positively adore book birthdays (cupcakes!) and more importantly I LOVE this cover and the title (Dragons Are People, Too)   and then I read the synopsis and except *waves down* See? I need to know more about Kitty the dragon and how she evades the bad guys. Enjoy!

Make sure you enter Sarah’s release blitz contest too! 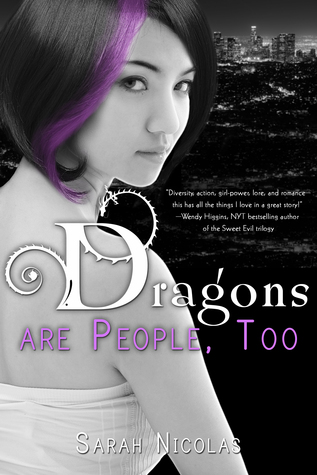 Dragons Are People, Too

Never judge a dragon by her human cover…

Sixteen-year-old Kitty Lung has everyone convinced she’s a normal teen—not a secret government operative, not the one charged with protecting the president’s son, and certainly not a were-dragon. The only one she trusts with the truth is her best friend—and secret crush—the über-hot Bulisani Mathe.

Then a junior operative breaks Rule Number One by changing into his dragon form in public—on Kitty’s watch—and suddenly, the world knows. About dragons. About the Draconic Intelligence Command (DIC) Kitty works for. About Kitty herself.

Now the government is hunting down and incarcerating dragons to stop a public panic, and a new shape-shifting enemy has kidnapped the president’s son. Kitty and Bulisani are the last free dragons, wanted by both their allies and their enemies. If they can’t rescue the president’s son and liberate their fellow dragons before getting caught themselves, dragons might never live free again.

Dragons Are People, Too

Thank you so much for having me on your blog today! I have an excerpt for you. In this scene, the CIA has just torn apart Kitty’s father’s tea shop looking for her. She’s hovering invisible against the roof. This scene is a great example of Kitty and Sani’s relationship.

I know my father’s dragon-self must be searing with rage, as mine is, but he doesn’t show it. “Told you she wasn’t here,” he says simply.

“That’s too bad,” Cleft Chin says. He shrugs. “At least we’ll be returning one rogue dragon to the compound.”

One rogue dragon? I don’t think there are any other dragons out on assignment today due to last night’s mishap. Domestic missions had been immediately recalled and foreign missions were told to hold off on returning until further notice was given. Who could they be bringing in?

When one of the thugs takes out a pair of handcuffs, I realize they’re talking about my father. My dragon-self roars in my head, the sound drowning out all logical thought.

“No!” I yell, but only Sani can hear me. My ability protects us from being heard, though I’m ready to lose control of that when Sani places a hand on the side of my dragon-head.

“Kitty.” He sounds scared, but far more in control than I am. “Look at me.”

I can’t. These assholes are putting handcuffs on my wheelchair-bound father and I’m calculating how many seconds it would take for me to rip all of their throats out. Less than three, I’d bet.

“Your father doesn’t want you caught,” he says. “They have half an army outside and I still can’t change.”

They start wheeling him out and the full length of my dragon body tenses. I’m thinking, as mad as I am, I could take out the bulk of the U.S. Army right now. If I let the dragon take full control, I probably wouldn’t even feel bad about it. I loosen my hold on the magnetic currents keeping me aloft and we descend a few inches.

“Look at me.” I hear Sani’s plea on the very edge of my rage-colored world. “Damn it, Kitty!”

Sarah is a 30-something YA author who currently lives in Orlando, FL with a 60-lb mutt who thinks he’s a chihuahua. She believes that some boys are worth trusting, all girls have power, and dragons are people too.

She’s a proud member of the Gator Nation and has a BS in Mechanical Engineering, but has switched careers entirely. She now works as an Event Coordinator for a County Library and as a freelance book publicist and author’s assistant. She also blogs at YAtopia and video blogs at the YA Rebels.

One Reply to “Release Day Blitz for Sarah Nicolas’ Dragons Are People, Too + Excerpt + Contest!”