Yay! Yay! Amy Joy Lutchen is back in ‘da palace! I’m so happy she’s in Tartlandia again. Last time she brought me her “Editor on a Leash” and I fell in love with her creativity and her heart…and her silly!

Now I am thrilled to help spread the joy and the pretty of book two in her fantasy series, Golden Dunes of Renhala. I love the golden glow and the sand dunes… it makes me dream… These books are on my TBR mountain. I love alternate world stories and there are dragons too!

How do you live with a secret so dark and so deeply woven into your being that it threatens to smother your very existence, with no known way out? Use it to your advantage.

Kailey Rooke, karmelean, and now a possibly unethical karma-for-hire, has spent the past year jumping from project to project, without any real hope for salvation. With repercussions from her actions at every turn, she discovers that as time goes on, she loses a bit more of herself to that which feeds on her anguish, that which is thriving inside her own body.

When a new contract to find a missing girl arises, Kailey attempts to put her past and its associated problems on the back burner, but she soon finds out that treachery and deceit lie shortly ahead in Golden Dunes, only giving face to new problems, with one leading right back to her childhood past.

She struggles to complete her contract as her own life teeters on a fulcrum, constantly tipping according to karma’s whim. How long will she keep her balance? Which way will she fall? 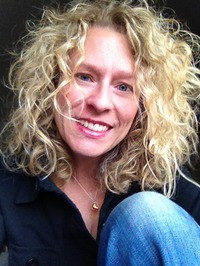 Grew up in the Chicagoland area and graduated from the University of Illinois, Champaign-Urbana, where she simply became a number, but decided it was a good number.

Loves cooking (mostly candy-cooking), gardening (putting holes in the ground for perennials, DONE!), designing and constructing jewelry (everything from silversmithing to lampworking), and living with her wonderful husband, two children, black Labrador, and frog—and maybe even the chipmunk family that likes to destroy her aforementioned perennials.

Also hopes that you enjoy her writings, and won’t criticize her for her aversion of eating things in multiples of three.