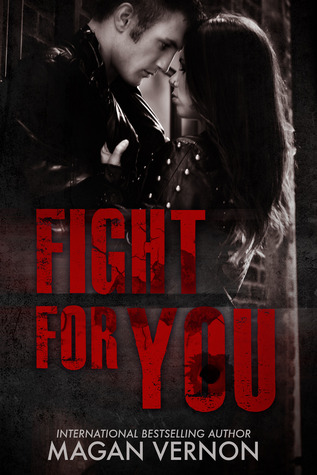 Happy Book Birthday to Magan Vernon! *Kermit Flail* Cupcakes and confetti for her new release Fight For You and for the Mafia prince who has to fight for his girl. The tag line “All Nicky has ever wanted to do was fight. Now all he has to do is fight for her.”  made me sigh. I am intrigued by Nicky and Jackie and want to meet them!

Megan Vernon (Author)
Release date: April 11th 2014 |
Publisher: Beautifully Broken Books |
Genre: Contemporary, New Adult, Romance
Format: eBook
Note: This book does contain sex, violence and over all ugly crying. This isn’t your typical boy meets girl NA romance.
A mafia prince who doesn’t want the crown.
A girl who has secrets of her own.
One love that they’ll both have to fight for.

Nicky Ragusa lives his life inside the cage, circuiting the underground ring to escape his fate as the mafia prince. When Jackie Marks crashes into his life, he’ll take the fight outside the cage.

But the battle for Jackie’s heart comes with a steep price. Nicky’s father has wanted him to take over the family business for years, and the time for running is over. Now Nicky is right where his father has always wanted him: in the middle of a war.

All Nicky has ever wanted to do was fight. Now all he has to do is fight for her.

Magan Vernon is a Young Adult and New Adult writer who lives with her family in the insurance capital of the world. When not writing she spends her time fighting over fake boyfriends via social media