Snowbound With The Soldier
by Jennifer Faye

Snowbound With The Soldier was just the escape I needed. I was having a bad day and needed to unwind. I took my ebook into the bathtub. Well, not IN it 🙂 But I was brave enough, or really foolish enough, to read in the tub. Jennifer Faye’s storytelling is sweet, without being sappy, and helped me relax and recharge. I adore second chance romances! They inspire hope that we don’t have to remain stuck by previous decisions and can find a happy ending.

Kara and Jason were high school sweethearts and engaged to be married… but he broke their engagement with no explanation and left her to pick up the pieces of her life. I liked Kara, she’s smart, determined and a bit sassy. She’s juggling being a single mom and worrying about losing her job at a resort that’s getting a new owner.

Guess who the new owner is? Yep. After seven years Jason has come home. He’s been medically discharged from the military and wants to make a new start… maybe  make things right with Kara. Jason is wounded physically and emotionally. I grieved for him. He feels broken and unworthy of love. But his feelings for Kara never really went away and working together, and getting stranded in a snowstorm together, help him start to open up. I got a kick outa Jason’s relationship with Kara’s daughter, Samantha. He has kept very isolated and lonely for years, but Kara and her daughter walk right into his heart. It was fun to see him adjust to those emotions and try not to be a Scrooge!

There is a theme of forgiveness and hope running through this story that I loved. Both Kara and Jason have to build trust again and face some difficult truths. I was rooting for them to get their Christmas miracle.

♥ But the second thing he noticed that evening struck him most profoundly. They didn’t treat him like an outside. They included him in their talk, as if he was one of them. As if he was family.

♥ His finger traced Kara’s jaw. Her heart pounded in a most irregular rhythm. “I like her, too.” He stepped closer. “And I really, really like her mother.”

Snowbound With The Soldier is a story with relatable characters  that made me sigh and nearly cry. I recommend it if you’re in the mood for a sweet romance about hope and love and Christmas cookies! 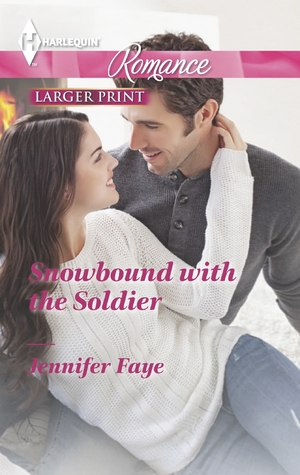 Snowbound With The Soldier

It has been seven long years since Kara Jameson last saw Jason Greene. Returning home as a wounded war hero, Jason looks a shell of the man she once knew. Yet her heart still skips a beat as if it was yesterday.

Stepping back into civilian life, Jason looks to Kara for help. But there’s too much water under the bridge; not to mention too much lingering attraction.

But it seems that the mountain weather has other ideas, and when Kara and Jason end up snowbound together they are forced to confront the ghosts of Christmas past.