The rock star and the average human woman… That’s a good fantasy. 🙂 It’s even more wickedly fun in Nico Rosso’s Heavy Metal Heart when the rock star is NOT human. In fact Trevor and his band mates were born out of human’s revelry when people first celebrated life. They exist on the feedback of the crowds enjoying their concerts and are nearly immortal.  I enjoyed the world building and liked this take on a supernatural hero.

In paranormal romance the love at first sight works, especially when it’s fated love. Trevor, has been seeking his Muse and finds her in Misty. She’s a relatable woman working her butt off in L.A. doing special effects. The music of Trevor has been a lifeline in her daily grind. She decides she’s going to break out of her rut and go to a concert in the middle of the week to hear him live. (Side note: There’s a great girl friend chat about what to wear that I adore!) When she gets to the show the connection between them was immediate and I was impressed at her spunk. She decides to go after what she wants.

Trevor felt the strength of their connection before Misty and well… how he reveals that he’s not exactly human scares the pants on her! Then they have to deal with fated love, ancient enemies, and the fact that Misty just powered up! She’s been changed by their relationship and I thought it was empowering how she stepped up and took control of her destiny.

♥ Trevor leaned close to the mic, his lips almost touching it. The room took a breath with him, quieting. They waited, balanced on the edge of his guitar string. They’d come along on wherever this journey was heading. But he only sang to the woman:

♥  “Don’t disappear,” he insisted. “I’ll find you. Even in the night. You’re burning too bright.”
Gathering her senses, she grabbed the front of his shirt. “Find me. Right now.”

“Because I’m your Muse?”

I read this story in just two sittings. It’s a quick read and only covers one night in Trevor and Misty’s life. But what a night! I enjoyed it and just held on for the ride. If you’re in the mood for a hot paranormal romance that’s equally naughty and poetic then pick up Heavy Metal Heart and rock out! 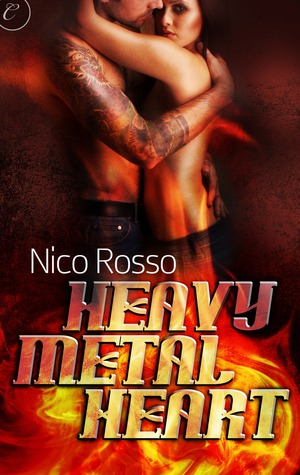 Rock Star. Front man. Demon. A descendant of satyrs and the lead singer in a band that feeds on the energy of its audience, Trevor Sand is growing weary of the constant need to perform. He needs the legend of the Muse—a woman destined to be a demon’s eternal companion and only source of sustenance—to be true.

Knowing that he’ll die if he loses her, Trevor must find Misty before his enemies do. But even if he can save her, he knows that regaining the trust of his fated Muse will be his greatest challenge

♥ Buy this ebook from: Carina Press| Amazon | Barnes & Noble | ARe