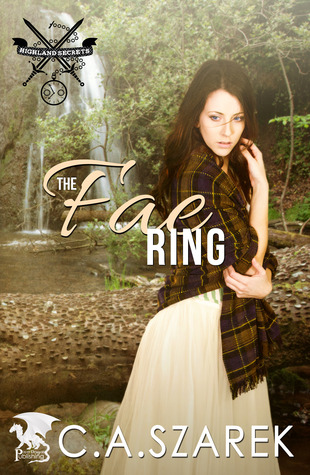 I’ve been eagerly waiting for C.A. Szarek’s sequel to The Tartan MP3 Player and a chance to revisit the world of the Highland Secrets series. The Fae Ring is book 2 and it’s a delicious mixture of paranormal and historical romance. Janet has been the lady of the castle since her mother died years before. She’s had responsibility and sense of place… but now her brothers are married and she is feeling lost… Where does she fit in now. She is happy for her siblings and their loves but… she is sad at her loneliness too. I empathized with her immediately and ached for her to find a life partner… a mate.

Enter Xander. *swoon* He’s a fae warrior who gave up his wings and most of his magic when he followed his duty and chose to live in the human realm to protect the faery princess who married one of Janet’s brothers. He is feeling lost and out of place too. Unexpectedly magic binds Janet and Xander together as soul mates but they need to decide if that’s what they want.

I loved their journey to true partnership and the adventures they were thrown into along the way. I got a kick out of Janet’s reaction to magic and the very hot chemistry between them. And I fell hard for Xander as he tried to protect and cherish her.   Their love scenes were yummy and the emotional chord that drew them together made me sigh.

♥ She closed her eyes against his shoulder, trembling as emotions swirled in her head. She felt right in his arms.

♥ Xander’s head and heart were floating, wrapped up in the golden magic of the mating bond… and in Janet.

I needed this romance. I slipped into Janet’s and Xander’s love story and just breathed. If you like paranormal romance, Scottish accents, homage to the Princess Bride (As you wish 😉 ) and a fated love that comes down to choices, then fly out and get C.A. Szarek’s The Fae Ring!

She’s always been a dutiful daughter…

Janet MacLeod has spent the last ten years dedicated to her clan, acting as the Lady of the castle—at the cost of her own happiness.

She aches every time she looks at her brothers, both happy with their wives, and wants nothing more than a love of her own.

Xander, a former Fae Warrior, sacrificed his wings and magic to live in the Human Realm and became a traitor to his people.

When he finds Janet forlorn on the beach, Xander gives her a ring he’s had since childhood, not realizing it’ll reveal her as his fated mate.

The ring’s magic activates the Faery Stones, and Janet is sucked into the Fae Realm. Her life is in immediate danger, for the Fae sense—and seek to destroy—any human who dares step into their world.

Xander is the only one who can retrieve her, but he too, wears a target.

Can he rescue his soul-mate and return with her to the Human Realm or will temptation of great magic and the rebirth of his wings force him to abandon their destiny?

One Reply to “The Queen of Tarts review of C.A. Szarek’s The Fae Ring”