Review of Survive To Dawn

*blush* ok- I’m not really a zombie fun *shudders* They squik me out! They are more La Revenant’s thing…

BUT I adore PJ Schynder and when asked to review her new release Survive Till Dawn I jumped at it. It’s the final book in her London Undead series… I’m a bad llama and haven’t read the first two yet, but that didn’t stop me from enjoying the thrill ride that is PJ’s storytelling. I especially liked the chemistry between Danny, the werewolf medic, and Deanna, the witch with a potential zombie solution. I got a geeky thrill out of the science and the magic and the paranormal beasties and I admit I shuddered at the zombies. (yuck!) I enjoyed this adventure and the romance that was sweet AND hot. If you like PNR and/or zombies give the London Undead series a fighting chance. Don’t mind me… I’ll just be off in a corner reading Bite Me and Sing For The Dead.

PS. Don’t forget to enter PJ’s contest *waves down* for a chance to win ALL three London Undead books! 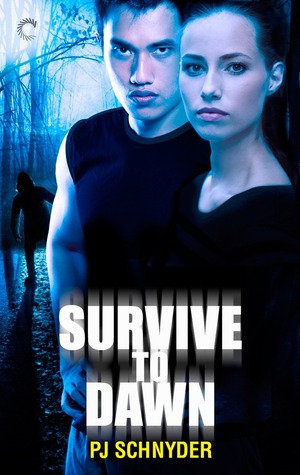 The zombie epidemic in London has been contained, but that’s all the werewolf pack that protects the city has been able to manage. Danny, as pack medic, is concerned the epidemic isn’t showing any signs of slowing down. And that the pack’s Alpha is too focused on eliminating the deadly threat to consider working toward a cure. When a team of American scientists arrive, talking of a vaccine, Danny is quietly hopeful.Deanna thought she was prepared for anything. But an argument with the London pack leaves her research team exposed and alone, on their own against countless hordes of the walking dead. Within hours, her colleagues are slaughtered…and it’s only because of Danny that she manages to get out alive.Deanna unhinges Danny in every way, tempting him beyond reason. She also pushes him to face the one thing he’d been avoiding: his Alpha is wrong. Simply surviving isn’t the answer…it can’t be.Don’t miss Bite Me and Sing for the Dead, available now!

and All Romance eBooks Buy Now