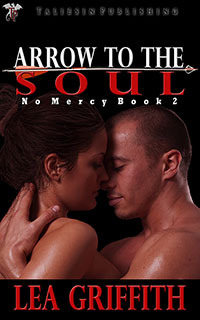 Arrow To The Soul

I LOVE these books! A romance series with female assassins as the main protagonists? Intriguing premise and the stories deliver- and how! Bullet, Bone, Blade and Arrow have hellish histories and bonds of sisterhood formed in the same fire. They are First Team and their lives are full of death… And yet, Ms. Griffith writes these women so you see into their hearts and yearn for them to have better lives. I have been eagerly awaiting Arrow’s story since I closed the book on Bullet To The Heart. Arrow To The Soul is exactly that. A story that pierces your heart and pulls you into Arrow’s journey. She is a master assassin with the bow and her life’s goal, along with her sisters, is to end the man, and The Collective, who condemned them to hell.

Arrow To The Soul didn’t make me cry like Bullet’s… It has a different flavor. It packed a different punch for me. I love how uniquely emotional each heroines journey has been. Arrow has learned to contain her feelings and reach for a zen like calm. I think my heart was clenched so tightly in empathy for her pain to let my tears fall. I just burned fiercely with Arrow for her revenge and then for her chance at love and light in her life.

She thinks she has no soul. She is death. She knows her purpose and it’s to end the evil that stalks her nightmares… She is afraid of the dark and yet she is a master of it. I ached for her pain and felt a sense of pride at her strength of will and her power. She is fierce.

Adam is part of Trident. His agency has a similar goal to First Team, to end The Collective. They just don’t like how the women are perusing that goal… They don’t fully understand the stakes. Adam tries, ha! tries being the operative word, to stop Arrow. She’s like water, you can’t stop her. But… he did slow her down. He is delicious and dangerous to Arrow’s peace of mind. She is surprised at wanting him… but she thinks he’s unavailable and doesn’t believe she can be wanted anyways.

I enjoyed seeing two very strong warriors lay down their weapons and become vulnerable with each other, give and receive pleasure. Arrow and Adam. Dark and light. Passion and ecstasy. Hope and hurt. I wanted to shake Adam sometimes and remind him that she is a flesh and blood and words hurt! And yet… He owns up to his mistakes and takes steps to repair the damage he caused. I ached for them both to recognize their emotions and reach for love.

The action scenes played out like a movie behind my eyelids. The espionage and danger of teams traveling across the globe to track down the enemy kept me on the edge of my seat. I love how strong and kick-ass the women are in these books. They are powerful and own it. Trident is pretty tough too and I am eager to learn more about the guys on the team… and if any of them are fit matches for Blade or Bone. 😉

This story has a lyrical cadence to it. It flowed along and swept me up. So many lines struck my heart and made me re-read them… Here a just a few.

♥ The darkness had a feel… a flavor. Arrow was drowning in a slice of black and the taste of endings.

♥ “Because I can survive in chaos. It’s all I’ve ever known.”

♥ “… But if what you say is true, then I will have to find her first and give her my heart to replace her loss.”

Lea Griffith’s writing puts my heart through the grinder. Gahhhh! Her No Mercy books have become one of my favorite series of recent memory. She brings the pain and then when love shines in, it’s that much better and brighter. Rush out, do not pass go, do not collect $200, just collect all the books in this series and get addicted to the passion, action and emotional punch of the No Mercy books!

Arrow To The Soul

She walks in the darkness—it is all she has ever known.

Arrow walks with death. It is bitter and black, and covers every step she takes. Trained from the crib to be nothing more than a death-bringer she knows she was born without a soul. The darkness is where she’s comfortable and she carries the weight of her duty notched on bow—ready to fly straight and true in to her enemy’s hearts.

He has known love and loss—and then he finds her in the darkness.

Adam knows his calling. Protect and serve. As a member of Trident Corporation he has found the perfect place to meet his obligations. Then he sees a woman with eyes of amber and he is taken under by her darkness. He touches her heart and knows he has no choice—share his light with a killer or lose his soul to her.

Darkness and light. Two sides of one coin. Retribution draws them together but before all is said and done they will learn love can either break you or make you stronger.