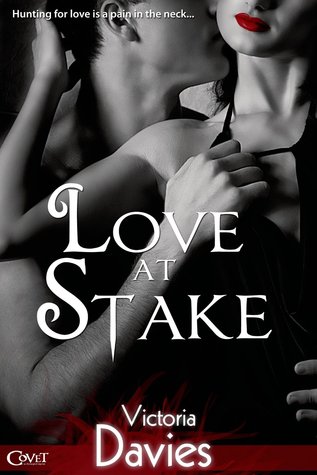 I sat down to begin reading this book before my belly dancing class and ended running late to class because I just had to finish it.  This story was fantastic! It was sexy, funny and sweet.  It had me laughing out loud one minute and wanting to hand out some of Gibb’s head slaps (NCIS fans will get the reference) the next.

Melissa, a vampire socialite, wants to join the supernatural dating agency, Fated Match, which promises to find you your eternal mate.  The problem, her father!  Lucian Redgrave doesn’t trust the company to not exploit and get his daughter hurt. Abby is the only human working for Fated Match and has a strict no vampire dating policy.  She’s sent to sign Melissa up and ends up signing Lucian.   His condition for allowing his daughter to join, they sign him up first and have 30 days to find his mate.  Something he hasn’t been able to do himself in the 1000 years he’s been a vampire.  He also wants Abby to be his personal representative, everything is to be planned and handled by her including attending every date for the first 30 minutes (awkward much???)

Abby is a wonderfully sweet, stubborn, passionate woman who sees being human not as a handicap but as a blessing and has no desire to become a supernatural being.  I love that even though she believes she can’t compete with the women she sets Lucian up with; she proves over and over again that even as a simple human she can hold her own when standing up to the supernaturals in this world, including Lucian.

Lucian is well  . . .*sigh* he’s a sexy, gorgeous, hot vampire stuck in his ways and sees humans as nothing more than passing fancies.  He’s also arrogant, exasperating and determined to have Abby in his bed but for nothing more than a night or two.  He’s had feelings for a human before and watched her die, he will not chance feeling that pain again, no matter what.

The secondary characters in the story were fabulous; Vivian (Abby’s boss) and a supreme QB, (aka Queen Bitch), Christian, a hunky numbers obsessed (Mr. 96% rating) were-wolf, and Chloe, the sweetest witch girlfriend a human could have, are just absolutely wonderful.  This book was freaking funny, it kept the sexual tension on high the entire book and is definitely a must have/must read!

Abbey is the lone human working for Fated Match, a company that pairs members of the supernatural community with their eternal mates.

To snag a young vampire socialite as their next client, Abbey journeys to the home of Lucian Redgrave, the oldest vampire on the East Coast. But he’s not willing to allow his vampire daughter to use the agency… unless Abbey can first find his perfect match in a month.

As Abbey coaches Lucian through his dates, she can’t deny the chemistry between them. But humans are toys for vampires, and risking her heart isn’t a part of the plan.