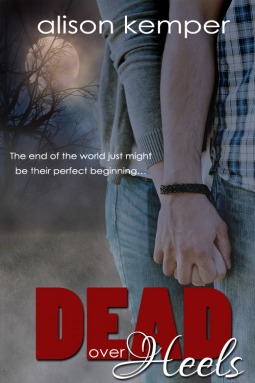 Dead Over Heels was a fun teen zombie novel with a bit of a twist. The characters were well written and they developed and grew over the course of the story.  There was action, drama, and love. Alison Kemper has a delightful writing style that I enjoyed immensely.

She kept the book exciting and I never once felt bored or that the pace of the story was slow. She also incorporated quite a bit of humor into this story of zombies and young love, which I thoroughly enjoyed!

“Search for a gun,” I order. “Under the seats.” … “There is nothing here,” she screeches, panicked. “What redneck doesn’t’ carry a gun in his truck?”

Copy of Dead Over Heels provided by Entangled Teen in exchange for an honest review.

The end of the world just might be their perfect beginning…

Glenview, North Carolina. Also known―at least to sixteen-year-old Ava Pegg―as the Land of Incredibly Boring Vacations. What exactly were her parents thinking when they bought a summer home here? Then the cute-but-really-annoying boy next door shows up at her place in a panic…hollering something about flesh-eating zombies attacking the town.

At first, Ava’s certain that Cole spent a little too much time with his head in the moonshine barrel. But when someone―or something―rotted and terrifying emerges from behind the woodpile, Ava realizes this is no hooch hallucination. The undead are walking in Glenview, and they are hungry. Panicked, Ava and Cole flee into the national forest. No supplies, no weapons. Just two teenagers who don’t even like each other fighting for their lives. But that’s the funny thing about the Zombpocalypse. You never know when you’ll meet your undead end. Or when you’ll fall dead over heels for a boy…