So I’m back.   Yes, I know. It’s been a long while, denizens of Tartlandia. And while I’d love to regale you with tales of my distant and wondrous travels. Well, the majority of this would be me telling you about how I drive to and from work.   And the Martian travels just take way too long to explain and then there’s the dragon—and where was I?

Oh yes. That’s where I was. Right here. Back in Tartlandia with a review for my gracious queen, her court and the wonderful residents.   Now I beg your forgiveness . . . or mayhaps I would more appropriately crave your indulgence. For I’ve come with a review not of a book, but a video game.   This would be the point in time where I take a faithful knee before my queen, clicking my cane down against the wondrous tile of her floors and couching my hat ‘neath my arm to explain why I bring a review of a game rather than a book. I did say I would try to bring more books than games, didn’t I?

Well, dear readers, rest assured, I’ll be bringing you more book reviews (with a few movies tossed in as well I do imagine). But here is where rather than begging your forgiveness, I would much rather glance up with a thoughtful smile and ask you to lend me your ears and your minds while I tell you a tale of a hero named Titus. Of a far-off world in a distant, fantastical universe, and of the demons Titus will face to save the people of that world from a gruesome fate.

Without further adieu (and I’ve given a rather long intro, haven’t I? 😉 )   I, Baron of Books and Viscount of Video Games, bring you a review of the video game Warhammer 40K: Space Marine.   And if you can say that game title five times fast, I’ll send you an e-cookie.

Now as the lovely opening sequence of the game plays. The first thing you are informed to is that In The Grim Darkness Of The Far Future, There Is Only War. For those of you who know much of the part science fiction, part fantasy, all crazy universe that is the Warhammer universe, you’ll know that to be a largely accurate statement.

The second thing you discover during that sequence is that there’s a bit of a fuss going on. A human world by the name of Graia is under attack by an alien horde. Now Graia is more than a bit important to the humans (the Imperium of Man. Which yes, makes said Imperium about as pretentious as it sounds). And the reason Graia is so important? Well, the majority of the planet is given over to factories and a massive complex that builds some of the Imperium’s largest and most lethal war-machines. Obviously, not a very good world to suddenly have come under attack.

To make matters more awkward, the Imperium’s defenses for the planet failed, and the reinforcing fleets dashing to the rescue are still more than a month out. Leaving the evil (and admittedly, more than a little hilarious with their cockney accents) alien Orks to rampage around the planet by the million, murdering civilians and looting nice shiny war-machines

That, dear readers, is where you are introduced to the character through who’s eyes you will view this grim, war-torn universe. A team of elite soldiers are deployed swiftly to the planet, not specifically to save people, you understand, but to save the factories themselves. The Imperium can always get more bodies. But losing such a large factory is more painful.   Enter Captain Titus of the Ultramarines Chapter, and his two battle brothers, Sergeant Sidonus, and Tactical Marine Leandros. One team out of several sent to secure vital equipment and hold it until the fleet arrives.

Now . . . you might be thinking this doesn’t sound very fun. I mean, the Imperium of Man is clearly not the nicest group out there. Obviously, military thinking says to save the equipment, especially when bodies are so readily available. But there is a painful, cold math to that logic that doesn’t sit well with many. And if the three Ultramarines were not written and voiced so superbly, the game would have been a far more depressing event than it was.

A bit of research into the Warhammer universe revealed a few facts, specifically on these Ultramarines, a chapter of the elite fighting force of the Imperium known collectively as the Space Marines. They’re super-human (genetically modified), chosen for their aggression and bloody-mindedness, and can essentially live forever. And that’s not even taking into account their devastatingly powerful equipment.

Now after I tell you that, you might expect this Captain Titus to be something of a psychopath, hellbent on beating up aliens with his sword and gun, and growling at anything that moves. Here’s the kicker, though. He’s not.

soldier in powered armor, carrying a weapon that makes most modern day assault rifles look like silly pop guns. Is a hero. And he’s not even trying specifically to be one. In some stories, there are characters that try to be heroic, and that isn’t a bad thing by any means. They strive to become, to inspire. And in doing so, endear themselves to the reader/watcher/player.

But there is another sort of character, the character who is so willful, so incredibly at ease with who they are and what they are doing, that they don’t have to attempt to be heroic, it’s a side-effect of them doing their job. Titus is one such man. Instead of a screaming lunatic, he is possibly one of the calmest, most thoughtful characters I’ve ever seen in a game. And if that were enough, he is hilariously good at his job. The opening combat sequence involves him leaping off his own damaged transport, in the middle of the Ork Invasion. Then landing on an Ork warship hovering in the atmosphere of the planet, and bringing it down with relative ease by turning the ships guns against itself.

And when he crashes with the wreckage, he pulls himself up out of the dust and blood and moves onward like it’s a regular day. At first, it comes off as arrogance, and for a bit, I wasn’t sure if I liked him. But then as the character made his way through a war-torn city, massive cathedrals and habitation complexes burning in the distance, I came to think that maybe he wasn’t arrogant, so much as just sure of himself and what he could do.

And even better than that, Titus isn’t there just to save the machines. After rejoining with his two subordinates, Sidonus the grizzled veteran and long-time friend, and Leandros the annoying puppy dog with “New Guy” practically written on his forehead. The three make their way towards the sound of fighting, for it seems that not quite all the planetary defenders are dead.

Space Marine is a game full of surprises. Reminding players that not everything is as it seems in this scary universe. But not quite everything is evil either. The three Space Marines find that another Imperium unit made it down to the surface. But these aren’t super-human Space Marines, oh no. They’re the rather regular (and oh-so-vulnerable) Imperial Guard, who are trying their hardest to make sure that they and the civilians they’ve managed to find don’t die.   The shocking, scary part is that it’s a few hundred humans with rifles against millions of large, thuggish aliens who like to kill for the fun of it.

Here Titus reminds the player that he’s not in the war just to save the factory. Moving forward to

bolster the guardsmen and find the commanding officer who kept the battered soldiers alive and together over the weeks. Enter Second Lieutenant Mira, a grim-faced young guards-woman who inherited command by dent of being last officer standing when everyone else got shot, clubbed to death or blown up. She’s understandably more than a bit worried about the math of her war. And explains to Titus that she can’t get reinforcements until she destroys an orbital defense weapon the Orks captured.

And his answer to her problem is simple enough. When she stares forlornly up at the gun, saying she doesn’t have the numbers any more to take the one thing standing between her and reinforcements, between her and hope. He says, “That is why we are here. Leave the gun to us.”

Now I’ve rambled a fair bit, haven’t I? The story itself, on paper. Isn’t anything spectacular. Three elite soldiers land, help out other soldiers, go on to save very important factory (with an extra helping of “don’t let it blow up”) and get into other hijinks on the way. But it’s the characters that elevate this story from mediocre to stunning. Titus is easily the standout, but the others are all given moments to shine. Mira’s still got a sense of humor, despite her hellish losses, with a quip of “I should warn you, my lords. We’ve got a slight Ork problem down here.” As the Ork horde continues to invade the planet. And she’s shown to be viciously protective of her men.

Sidonus, the grizzled veteran, brings a sardonic ease to the story. Nothing phases he or Titus, and their scenes together are amazing in how well the two characters (and actors) seem to mesh. While the annoying puppy dog Leandros is going around talking about how they need to follow the exact letter of their military codex, Sidonus and Titus are thinking about how to win a war that includes the three of them, a few hundred relatively squishy, regular humans, and a whole lot of bad guys with guns.

But . .. Titus. (Can you tell I like him yet?   Is it obvious? Because it really, really should be.) Titus is the star, and he shines like a super-nova. Mark Strong brings such a calm, resilient air to him. In an interview, Mark Strong mentioned that Titus had an almost “zen”-like quality. And I’d have to agree. He’s shown to be a caring, surprisingly nice guy. But also a man of incredible will power and strength of arms, and on top of that, he’s intelligent. When another character talks of what-ifs, maybe’s and “If only the Orks hadn’t invaded, He would have had enough time to complete his work.” Titus’ calm response is “But they did.” And his implication is clear. What-if’s don’t matter, they must deal with the current state of affairs, instead.

As the world of Graia crumbles around him, new threats emerging from every corner. Traitors and ancient enemies practically coming out of the woodwork for this oh-so-important planet, Titus takes it all in stride, moving ahead because he has no other choice. Because he is an Ultramarine Captain, and he is most definitely “not” going to let the world of Graia, or those humans upon it, fall to the ravaging hordes.

What else can I say, readers?

(With a slight p.s.   It’s a Warhammer Game, and they do have very, very bloody combat. Not for the feint of heart.) 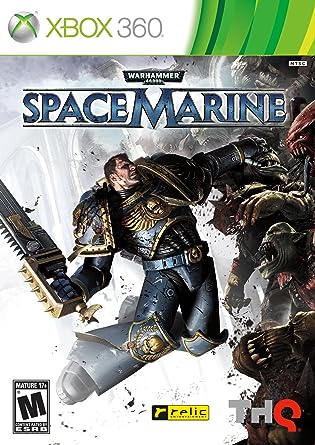 In the Grim Darkness of the Far Future, There is only War.