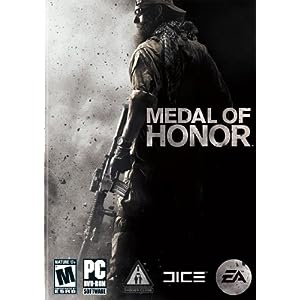 The Baron of Books asked me if he could write me a review of a game he just finished and really enjoyed. After he told me more about the story and in light of the Veteran’s Day holiday, I thought this would be a perfect time to share it. I am very grateful for the men and women of the armed forces who have chosen to protect and defend my freedoms… Sometimes to the ultimate sacrifice. One of my sisters is a veteran of the Marine forces and one of my brother-in-laws is in the Army. My boss is a veteran too and I have many friends and relatives who are active or retired. My thanks to all veterans as we remember their service this Veteran’s Day.

The Baron of Books aka

Viscount of Video Games Review of

So, while most of you know me as the Baron of Books, did you know I’m also the Viscount of Video Games?   (Yes, it took me a depressingly long time to think up that little moniker, hush).

Books and video games I feel are two sides of a coin, maybe it’s a three-sided coin, considering movies are in there too.  This oddly shaped, yet valuable coin is the coin of story.  I love books, a lot.  And  I love video games, a lot.  Both give me access to vast and wonderful lands full of interesting heroes, dastardly badguys, and everything in-between.  Mincing my brain for something to review, I thought to the last few weeks, I haven’t read a lot of  books in the past few months.  Full-time work is still something that’s a little new to me, and it severely cut into my leisure time -.-

But in the past few weeks, I did pick up the new game, Medal of Honor: Warfighter, for the xbox 360.  Playing through it caused me to want to play its predecessor, the simply titled Medal of Honor.  For those of you who’ve heard of it, you probably remember the Medal of Honor series as the games set in World War II, because none of us like nazis, right?  The last two games, though, jumped from WW II to the Modern Era, and frankly, I think they did a good job.

Now hold on, I hear you say.  We didn’t come hear to read about games (or maybe you did, but I sort of doubt it 😛   )   And so here’s the deal, I’m mostly going to review books.  As I said, I’m a lover of both.  But I also think that video game stories deserve some talk as well, and with the Queen of Tart’s blessing, every little while I’ll do a review of a video game story.  That’s the key, there, I think.  The story, ladies and gentlemen, I’ll not pay much attention to how the game plays, but more to the story itself, to the characters and plot.

Following is a short review of the 2010 Medal of Honor story, there may be spoilers, you’ve been warned  *takes breath*  here goes.

The Medal of Honor games I’ve always liked, mainly because they seemed like they actually cared about what they were doing.  Their stories, while set against the backdrop of Hitler’s relentless war against . . .well, everything, were mainly about the few men and women (French Resistance in the games were generally led by an amazing woman named Manon) who bravely dared the impossible.  This 2010 remake of the games was taking a bold step, moving from the 1940’s to the modern war against terror in Afghanistan.  Focusing especially on the “Tier-1” units, aka: Navy SEALS and Delta Force.

I first jumped into the shoes of a SEAL by the call-sign of Rabbit.  Without much to go on, it seemed he was probably the youngest of his four-man unit, the other three seemed older, and generally more at-ease.  Driving along at night, somewhere in Afghanistan.  The mission was simple.  A local leader friendly to American forces had information on terrorists in the area.  So the SEALS were sent in to get the information.

Sounds simple in theory.  Not so much in practice as it turns out the Taliban figured it out too, took the informant captive and laid  a big nasty trap.  A raging fight through a small town ends with them finding the man they’re looking for and freeing him from his captors.  By this point, the SEAL’s are just a tad on the grouchy side, no one really likes to get shot at by dozens of armed men.  But his alarming news focuses them swiftly.  Taliban forces have decided that the nearby mountain is a jolly good spot to move into, and have sent plenty of men to make sure they keep said mountain.

The story progresses swiftly on from there as the American and Afghan army forces move to stop this new threat. From Rabbit I jumped to the viewpoint of a Delta-Force Sniper, call-sign Deuce.  And met his partner, a man who went by Dusty.  And let me tell you right now, Dusty the Delta rocks possibly the most amazing beard of all time.   *cough*   Just had to say it.

Switching back-and-forth between Rabbit and Deuce, I got to watch the intense camaraderie of the two four-man teams as they went about their dangerous business of marking targets for airstrikes and just generally wreaking havoc where they could in preparation for a bigger attack on the mountain.  They discover that there’s more than a few hundred enemies hiding on the mountain, and quickly advise their commanders that more time is needed to prepare the area for an attack.  They are informed by a particularly arrogant general, however, that the main American force of Army Rangers will be entering the area on the next day.

“It’s Find the Bad Guys, Kill the Bad Guys.  Doesn’t work so well the other way around.”  The SEAL Commander hisses into his radio, though to no avail.  The orders are set and they must obey.

Now, there are a few segments of the story that switch point of view to first an Army Ranger, and then to the gunner of an Apache Gunship, both lending some very tense moments to the story.  But the primary focus remains on the team of SEALs.  You see, they’re still on the mountain, and things get dicey fast.  As I played through the game, I noticed that it was almost intentionally light on overarching plot.  It’s simple enough, set in the early days of the war in Afghanistan.  As the SEALs said, it’s find the badguys, kill the badguys.

But then I realized that the battle wasn’t really the focus.  It was the characters, and what they’d go through to save each other.  It was a brief glimpse into the camaraderie of our armed forces, and while of course it is a game, I think it captured the essence of it.

As briefly mentioned before, things “DO NOT GO WELL” ™.

What was a fairly simple mission quickly spirals into an entire angry mountain trying to kill the special forces atop it,  leading to the SEAL team getting split up as they try to get off the mountain.  Rabbit and his commander, call-sign Mother, are able to board a helicopter, but are forced to move off before the other two members of the team can get aboard.  They are ordered to return to base and brief a rescue team.  And the logic behind those orders does make a certain amount of sense.  The two SEALs aboard the helicopter are tired, they’d been fighting, and then running and fighting, for days.  But Mother knows that if he takes the time to return to base, odds are good his two squadmates left on the mountain will die.

Thus, he and Rabbit order the helicopter to turn around and drop them off.  The sheer simplicty of the decision is almost mindblowing.  When they learn of their orders to return home and brief others on how to rescue their friends, they instead willingly step back into the line of fire, back to a mountain whose inhabitants quite readily want them dead.  Back to find their brothers before the enemy does.

As I said, it’s about the characters.  And for Voice-actors given so little time, the cast of the game does an admirable job.  Everyone goes by call-signs.  Mother, Rabbit, Voodoo, Preacher.  Dusty, Deuce, Panther.  Much of what the actors recorded was combat dialogue, giving them a small amount of lines to develop their characters.  Rabbit doesn’t talk much, probably by design, as he’s one of the characters that you as the player take control of.  Mother, though, an intelligent and loyal leader.  Who braves a mountain of terrorists rather than leave his friends to die.  Voodoo, a seriously grouchy guy who at one point takes a tomahawk to an unfortunate enemy careless enough to try and punch a Navy SEAL.  Preacher, quiet, collected, and also apparently a lover of hip-hop, according to Voodoo.

Deuce and Dusty seem an older pair, with Dusty doing most of the talking.  Gruff and to the point.  But even amidst the carnage, there remains a certain hard-boiled levity to the entire group.  When Mother and Rabbit return to the mountain to rescue their comrades, they are caught on a cliff and forced to choose between fighting insurmountable odds or an unsure jump down a fog-ridden cliff that might end in a nice big snow pile or a bunch of hard rocks.

“Bullets?  Or Broken bones?”  Mother quips to a wounded Rabbit.  Then he takes a flying leap off the cliff with the words “Broken bones heal.”  And Rabbit quickly follows suit.

The ending of the game is a fine one, and I shan’t spoil it for you, in case you ever feel like playing it 😉   But let me say it is one of the more emotional ones I’ve ever seen.  And the finest voice-acting of the game resides there, quiet words spoken over a radio.  There is no need for these men to raise their voices, the intensity of their tone burns bright, making you hope against all odds that things are going to be okay for everyone, that it’s all going to turn out fine.

Before the credits roll, the game developers issue a solemn thanks to the men and women of our armed forces.  It might sound cliche, maybe it is.  But the Medal of Honor games have always approached the stories of our armed forces with respect and a certain amount of grace.  The story wasn’t groundbreaking by any means.  Four men who risk their lives for each other on a daily basis caught in a bad situation.  It could be told in a dozen different ways.

But Medal of Honor told the story well, and that’s what matters here.

Regards, The Baron of Books