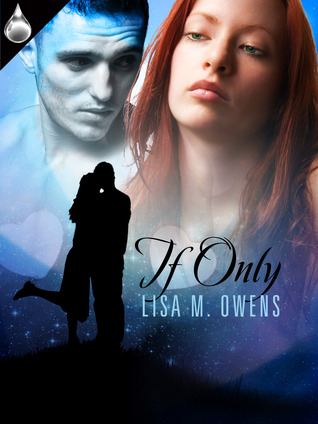 Yay! I have Lisa Owens playing at The Book Tart today! She’s a darling and helps me eat cookies. 😉 Join the fun and make sure you add If Only to your TBR pile (Click HERE for my review) and enter to win her books!

Me: Lisa! Hey Sweetie, come on in and take a seat on my virtual couch. *pats cushion* see? Comfy! I’m so glad you’re here at The Book Tart… *blushes* and ummm… that you are patient and didn’t give up on my! You gave me a couple chances… and your debut is all about second chances! 😀 Thank goodness!

Lisa: Thank you so much for having me!

Love the couch…nice and comfortable. Where can I buy one?

Can you tell me a little about If Only and what you are working on now while I get us some tea… and cookies? *sigh* I love cookies… and Bree and Scott. 😉

Lisa: Yum…I love cookies too. If you have any, please make mine chocolate. My name is Lisa and I am a chocoholic….

Like most women, Bree Sexton made a decision that changed her life forever. She broke off her engagement and walked straight into the arms of a stranger. She thought her marriage would be a match made in Heaven. But she soon discovered that instead, she had married the devil in disguise.

Five years later, she is celebrating her divorce with her girlfriends when she runs into Scott, the man she left behind. He is happily married with a baby on the way and she starts to wonder what would have happened if she had married Scott instead.

She soon discovers the answer when while walking across the street, she slips on a patch of ice and hits her head. When she awakens, she is in her former fiancé’s arms. But is this reality or a wonderful dream come true?

I am currently working on the second part of my If Only series. This one is titled What If and it is about a woman who married for love and fourteen years later, she wonders if she made the right choice. When Maggie Ryerson was nineteen, she had two handsome men vying for her attention. One was the father of her child and the man she loved. The other was her friend who comforted her while her world was spinning violently out of control. She married the man she loved, the father of her child. But when money troubles and her husband’s inability to keep a job burden an already shaking marriage, she wonders what would have happened if she had married her wealthy friend instead. When she gets the chance she has already longed for, she realizes that having money might not be all it’s cracked up to be.

I am also working on a story about a wounded Marine who returns home from Afghanistan to discover that his wife has walked out on their marriage, abandoning him when he needs her the most. But a chance encounter with a beautiful, creative artist will bring these two wounded, troubled souls together. But can two people who have been betrayed by the ones they loved the most build a future together? Or are they doomed to be alone due to their lack of faith in other people?

Me: Ooohhh! I love the theme of second chances and hope. *sigh*

*sets tea on table* ok hon, drink up! It’s Quickie time… there should always be time for a quickie right? Oh! and make sure you swallow before you laugh… I forget sometimes…

1. If you could be a fruit… what would you be?
Strawberries, because most people call me sweet. *blushes*

2. Finish this sentence, If Only…
If Only we could all get the chance to correct our greatest mistake.

3. What can you not leave home without?
A book…imagine that, an author who likes to read! Also, I almost always bring along a small notepad and pen for any writing ideas I have!

4. How many pairs of high heels do you own?
I am not one of those women with five hundred pairs of shoes. I only buy them when I absolutely HAVE to. Probably about six pairs.

6. What would be your dream sandwich?
Besides an ice cream sandwich? (yum!) Probably a club sandwich, hold the lettuce and tomato. I like them in a salad, but not on a sandwich.
7. Can you curl your tongue?
No. But my bf says my head can spin around. But he has no proof, so I don’t believe him. LOL.

8. What are you most scared of?
Snakes…and mice. YUCK!

I love Jeff Dunham too! I’ll check out Gabriel 😀

10. Have you ever milked a cow?
No…but I have always wanted to write a story about a cowboy. Would love the chance to spend some time on a farm or ranch and learn how they operate. Would be willing to learn how to milk one…for writing purposes only, of course! JK.

Awww you rock hon! Thank you so much for playing with me. Open invite to crash my couch. 😀

I might take you up on that when What If is released. Maybe we can offer one free copy of both!

Me: Oh My Goodness! *Snoopy Dance* Thank you Thank you! Ok ya’ll the contest is at the bottom of this post. Don’t miss out. 😀

What would you do if you had the opportunity to go back and relive your greatest mistake?

Five years ago, Bree Sexton walked out on her fiancé and into the arms of a charming and handsome stranger. She has regretted her decision ever since. Instead of a fairy-tale marriage, her “prince” shattered her dreams and her spirit with physical violence and emotional cruelty she barely escaped.

She then mysteriously wakes up in bed with the fiancé she loved and left, the life she’d dreamed of now a reality, until her cruel ex-husband reappears to destroy her new life. But what is real, and what is make-believe? Is she really getting the chance she has always dreamed of? And when it is all said and done, will she finally end up with the man she has always regretted leaving? Or will she wake up to discover herself alone?

Bree stood there for a minute, watching as he walked out of her life. She couldn’t help but wonder what would have happened if she had married Scott instead of Bryan. How would her life have been different? Would she have had children by now? Would she and Scott still be together, after all this time? Those thoughts and more weighed heavily on her mind as she headed out of the bar. It had begun to snow, and she wrapped her coat even tighter around her slender frame. She looked around, but there was no one to be found. She couldn’t help herself; she stuck out her tongue, a childish impulse she couldn’t ignore, and then laughed out loud in spite of herself.

She looked both ways before attempting to cross the street. Not seeing any cars, she began to make her way across. Bree was walking cautiously when one of her high heels slipped on a patch of ice. She could feel herself falling, and her breathing quickened as she began to panic, wishing she had waited for her friends before venturing off on her own. One shoe flew off as she landed, her head striking the curb. A sharp pain racked through the back of her skull, causing her to cry out. The last thing she saw was Scott’s face swimming before her eyes, and then her world went black.

Bree awoke to a man nipping gently on her earlobe, his tongue stroking the delicate curves. His hot breath blew into her ear, sending shivers up and down her spine. She slowly opened her eyes as a man’s hand stroked her upper thigh, and she sighed happily.

Ooh, I must be dreaming. And it was such a delicious dream, too.

The man’s hand traveled up her thigh and then encircled her flat stomach. Out of the corner of her eyes, Bree could see a dark head pressing against her abdomen. Then she shivered as a tongue laved her belly button, going in and out erotically, making her feel as though her body was on fire. Bryan had never made her feel like this, and she hadn’t even looked yet to see who this stranger was! But she was only dreaming, so what difference did it make?

His hand continued traveling north, lovingly caressing her skin. He reached for her aching breasts, pressing her nipples roughly before he lowered his mouth to suckle them, first one, and then the other. Bree arched in anxious response to his touch. She longed to see his face, but she feared one look would make his magical touch disappear.

She ached all over, wanted his hands to caress her everywhere, and she longed to touch him. She opened her legs as he straddled her. His hair brushed her naked chest as he began kissing her. His tongue was driving her crazy with desire as he placed tender kisses along her neckline. He brushed her hair aside.

His morning stubble stung her delicate skin, but she hungered for more. Just one more touch, just one more taste, and she would awaken from this wonderful dream and find herself in bed, all alone.

“Oh, Bree, baby. What you do to me,” he whispered, his voice husky.

That voice jerked her back to the present. The voice had haunted her dreams for

years. The voice of the man she just couldn’t seem to get over.

The writing bug bit Lisa M. Owens at an early age; she was writing short stories and poetry by the age of seven. At the age of eight, she entered a writing contest at her elementary school. About fifty books were written, but Lisa was one of the thirteen writers chosen who received a certificate and the chance to meet Oklahoma writer Sandy Miller.

A former victim of domestic violence herself, Lisa worked at the courthouse for over seven years. Almost three of those years she worked on the Marriage License/Protective Order desk. She helped women file protective orders and worked closely with the staff and counselors at DVIS.

Frustrated with books that merely gloss over the subject of domestic violence, Lisa wanted to write a book that told the entire story. Her dream is for her words to help give someone the courage to leave an abusive relationship.

She resides in Oklahoma and has two children. This is her first published novel, and she is currently working on the next novel of her If Only series.

Lisa enjoys hearing from her readers and can be reached at P.O. Box 9643, Tulsa, OK 74157-0643, or by e-mail, lisamowens@ymail.com. She can also be contacted on her website, www.lmowens.com.

What: Lisa is giving away a digital copy of If Only and her upcoming release What If to a lucky commenter!

answering one of the quickie 10 question!

8 Replies to “The Book Tart Quickie with Lisa Owens + Excerpt from If Only + Contest!”