I met Chrissy aka C.A. Szarek months ago and *blush* ummm this is the first book I’ve read of hers. She didn’t disappoint!  She also has an awesome looking fantasy series, The King’s Riders, that is on my TBR pile. 🙂

Listen in on our funtastic chat and make sure you enter for a chance to win her new book!

Me: Chrissy! *pounce hug* It’s been too long hon. Come in come in. *flops on couch* Get cozy and lets catch up. I haven’t hugged you since the Romantic Times Convention in May. Gahhh… This summer has flown by. Oh! I have snacks of course. *grabs a handful of gummy bears* help yourself.

Chrissy: Remember, my vices! Coffee and Chocolate! *laughs* On a serious note, it was FANTABULOUS meeting you at RT. So much fun. I am so glad we got to hang! We must do it again!

Me: Yes! Yes! Yes! <g> We rock the Casbah together! lol Meeting you was a highlight for me. And… of course I has chocolate. *passes bowl*

So what have you been up to this summer? Any fairground food or farmer’s market-y activities? I’ve only been to the farmers market once this summer… and it’s almost over. Gahhh 😛 I need more kettle corn!

Me: Geez Louis Girl! I mean, well…  I love the stories but meep! 😀 you need more chocolate. STAT!

I know a big part of your summer has been the release of Collision Force! *Kermit flail*  Tell us a bit about your Crossing Forces series and  writing romantic suspense and if you have to wear different hats to shift writing gears and if you like green m&ms. *gasps for breath* and how well you do with run on questions! 😀

Chrissy: Welllllll, yes. The release of CF was the highlight of my summer! I LOVE this book, LOVE this couple, so for it finally to be out is more exciting than I can express w/ words. (Yes, I do realize I’m a writer, and admitting that is silly. Hehehe) Crossing Forces is the series title for my (HOT) Romantic Suspense series, as you mentioned. It’s about small town detectives having to work with a few (HOT) FBI agents. Book two, Chance Collision will release Jan 31 (Soooooo excited again!)

Vowing to protect her had nothing to do with feelings.

Detective Pete Crane catches a new shooting case and considers it business-as-usual. But when the lead witness is the Chief of Police’s fiery assistant, he never anticipated she’d challenge him—personally and professionally. Especially while under his protection.

Little do they know, the shooting she and her grandmother witnessed was anything but random.

Thrown together, their attraction sizzles, even though she’s squarely in the no-fly zone. She makes him break every rule in his little black book.

Nikki Harper has been attracted to Pete since they met two years ago. Witnessing a brutal shooting throws her into a stigma that’s always been her greatest fear: a victim. She has no choice but to accept his protective custody and let him help save her and her beloved grandmother.
an Pete protect his witness and solve the case, while fighting the intense heat with Nikki?

Chrissy: I write multi-genres, as you know. As far as shifting gears from fantasy to rom sus; it’s not hard for me. I guess it’s all in the focus I need for a certain project. I love being diverse. When I sit down to write a certain something, I guess my mind knows it, and I am able to handle it. So far it’s been great!  (P.S. Love’s Call (King’s Riders Book Two) the 2nd in my fantasy romance series comes out Fall 2013)

Me: You, my darling are a Jane of all trades genres! YA Fantasy with your Swords Call series, Romantic Suspense and paranormal oh my. <g> What are you working on now?

Chrissy: Hehehe, thank you!  I am working on Crossing Forces Book Three, Calculated Collision AND book 4, Collision Control. Yes, I am writing them at the same time. I am a totally glutton for punishment, but certain characters *glares at the hero of book 4* won’t SHUT UP in my head.

I will start fantasy book 3 when I am done with these two. It doesn’t have a title yet, but I know who it’s about and I have two scenes written.

My next release, as I had mentioned, is Love’s Call (King’s Riders Book Two).

Senior King’s Rider Ansley Fraser has been in love with Leargan Tegran for turns, but he’s never noticed her. When she sets out for Greenwald to deliver a message to the duke, she has no idea its contents contain an order that will change her life. Instead, she is focused on visiting dear friends.

Leargan, captain of the Greenwald personal guard, is an honorable knight, so when the king commands him to wed Ansley, he intends to follow orders, even as he knows nothing of the girl.

Ansley ignores her instinct to question Leargan’s sudden interest in her. She wants to fall into his arms—and his bed—even as Ali, her wolf bondmate, growls her reticence.

Her extended visit allows Leargan time to win her affection, but when he falls for Ansley, it takes him by surprise. Will she be willing to give herself to him if she learns their marriage has been commanded by the king? What will it take to convince her he’s not simply following orders?

Chrissy: I *just* did a cover reveal. You can see it on my blog!

OMG! I need to tell you about this! For everyone who loves Andi and Cole, they will have a CHRISTMAS Story! It will be A FREEEEEEEE download on my publisher’s website, as well as in their Nov newsletter. I am so excited!

Detective Cole Lucas and his wife, fellow detective Andi are taking it easy for the holiday—time off from the police department.

Andi’s plans for Christmas are shattered when her family cancels. They’re not coming home to Texas. She’s crushed, sure Christmas will be ruined. But Cole is fine with an intimate affair—just them for the holiday, forging new traditions.

Can Cole show Andi she can rely on him and prove he’s all she needs for Christmas?

Me: Awwww…. YOU are such a tease! I love it! More Chrissy!

So darlin’ since we’ve done the Book Tart Quickie already (and it was good!) Now I’m gonna be nosy. 😛

1. What book did you just finish?

Yes. I don’t care for cleaning up, tho.

A girl after my own heart!

3. If you could go back in time to change one thing what would it be?

Hmmm…I dunno. Maybe I would be born in a different era. Like…Scotland and be married to a hot highlander. Yeah, I like that. A Laird’s wife. *wink*

5. What football team do you support?

I don’t do football.

6. What do you have on your fridge door?

I collect magnets! I love author book cover magnets, I have TONS.

7. Can you impersonate anyone famous?

Not without embarrassing myself.

8. What’s your favorite feature on the opposite sex

9. What would be your dream car?

Me: Nice! You are a dear and I adore you to the Muchness! Thank you so much for hanging with my on my virtual couch. I’m excited you have a couple more book birthdays this year so we can play again soon.

PS. Chrissy’s giving away an ebook of Collision Force! Go forth (or really down) and enter! 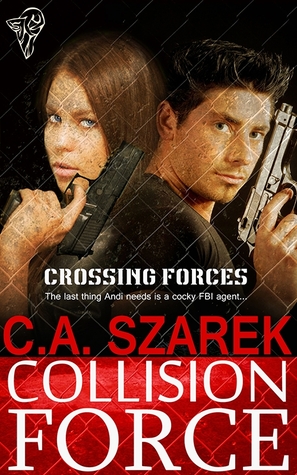 Email: ca@caszarek.com  I LOVE to hear from readers!

What: C.A. is gifting one lucky commenter with an ebook of Collision Force!!!

How: Use the rafflecopter and tell us your dream car
Void in whole or in part where prohibited.