Today is Juliette Cross’ book birthday for Windburn! It’s the 2nd novel in her urban fantasy/NA Nightwing series and it has dragons! *swoon*

Juliette is a darling and she answered my Quickie Ten! *points down* See?! 😀  Enjoy the silly and take a closer look at Windburn too. Oh! grab a cupcake and wish her happy book birthday when you enter her giveaway at the bottom of this post. 😀

Me: Welcome to The Book Tart! Come in, come in and get cozy. *waves to red couch* take a seat and I’ll get snacks! Can I get you a drink? Water, soda, coffee, tea… something festive?
Juliette: Why, thank you so much for having me. It’s a pleasure to be here. Coffee with sugar and cream would be terrific, thanks.

Me: I’m so happy you’re here! *plops down on couch and passes Juliette her drink*. Oh! Oh! *opens the lid on a box of

cupcakes* Happy book birthday! Your 2nd Nightwing novel Windburn is out now! Grab a cupcake and tell us about Lorian and Sorcha. 😉

Well, Sorcha is a confident woman who uses sex as a weapon, barring any man from coming close to her heart. There’s a valid reason why, which the reader learns early on in the story. In walks Lorian…*selects chocolate cupcake with chocolate icing and green dragon-shaped sprinkles*…let’s just say that he’s a man, a Morgon man—a dragon hybrid—who knows what he wants. He refuses to become another of Sorcha’s “playthings” and demands much more than her body (though he wants that, too). She’s unprepared to combat a dominant man of his many skills, and it’s tons of fun to watch her try to outmaneuver him. 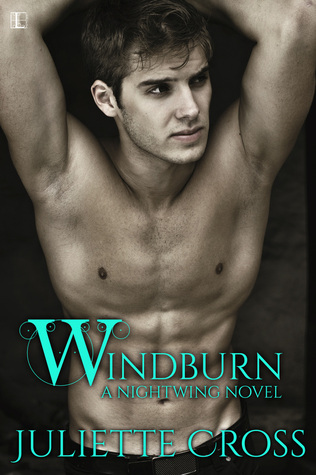 No man can win her heart—until now…

In the Gladium Province, the boundaries between humans and Morgons, the dragon-hybrid race, continue to blur as a new generation surrenders to long-forbidden temptation…

Sorcha Linden does whatever she wants whenever she wants, and no one can stop her. Least of all a man. After all, they’re good for only one thing—warming her bed. But then she meets Lorian Nightwing, brother of Lucius. Seductive and iron-willed, he is determined to melt her emotional defenses—and warm her rebellious heart.

The beast within Lorian longs to cage Sorcha and mark her as his own. Forever. Yet the man within also longs to protect her. When a stalker starts leaving Sorcha suggestive gifts with cryptic messages bearing an ancient blood cult symbol, Lorian’s dragon side takes over. With her life at stake, Sorcha can no longer deny the love they share. But when evil tracks her into the night, will she be too late to claim it?

Me: *licks frosting off fingers* I can’t wait! I love dragons and paranormal romance and Windburn sounds delicious. Speaking of dragons…. What can you share about your new series Vale Of Stars and what are you working on now?

Juliette: Oh, thank you for asking. I’m so excited about this series! To be honest, the Nightwing series was meant to be an introduction to the Morgon world, told through the love stories of three best friends. Vale of Stars is a more in-depth series, which begins five years later when the tension between humans and Morgons is at an all-time high. Much of it is due to the fact human girls are going missing and Morgon DNA is found on the mutilated bodies. This series will explore every aspect of this fantasy world and the Morgon culture, including magical creatures that live in different parts of the realm. I’ll be starting book two, HUNTING THE WITCH, very soon.

Me: Ha! You are a very busy girl! But before I let you get back to work we NEED to make time for a quickie. 😉
It’s time for

3. Who sent the most recent text to you?

One of my closest friends in the book world, Cora Cade.

5. What book are you reading?

6. Do you still have any music on vinyl or cassettes?

Hahaha! I wish I did. My husband wooed me in college with a series of mixed tapes of The Cure, The Cult, and Led Zeppelin. Smart man. 😉

7. What’s the most unusual name you’ve ever come across?

Pleasure (I’m not making this up.)

Like- Hello Pleasure, it’s a pleasure to meet you? <g>

8. What was your first car?

1986 yellow Nissan Sentra that my high school friends and I affectionately called “The Lemon” due to its bright color and ability to leave me stranded at will.

9. Have you ever eaten a whole tube of Pringles by yourself?

Extremely! Don’t even think about it.

Me: <g> You are a darling dear for satisfying my curiosity. Thank you so much for visiting and sharing your book birthday with us. I’m excited to see what you write next. So get writing! 😉
Oh! Feel free to swing by again for more cupcakes and silly chats.

Juliette: It was a pleasure being here. The cupcakes were delicious.

Juliette calls lush, moss-laden Louisiana home where the landscape curls into her imagination, creating mystical settings for her stories. She has a B.A. in creative writing from Louisiana State University, a M.Ed. in gifted education, and was privileged to study under the award-winning author Ernest J. Gaines in grad school. Her love of mythology, legends, and art serve as constant inspiration for her works. From the moment she read JANE EYRE as a teenager, she fell in love with the Gothic romance–brooding characters, mysterious settings, persevering heroines, and dark, sexy heroes. Even then, she not only longed to read more novels set in Gothic worlds, she wanted to create her own.

4 Replies to “Interview with Juliette Cross + Spotlight on Windburn + Contest!”