I had another playdate with Nico Rosso! *Kermit flail* He’s darling and well… I love his book Slam Dance With The Devil so I gush. BUT- between my gushing we chat about how he writes and about his Demon Rock series and what he does for his book birthdays and a super cool hobby he has and how he feels about the ebook vs. print debate. He ROCKS! just like his books. Enjoy!

Oh! I am giving one lucky duck Slam Dance With The Devil cause I loved it so very much. (I am hoping to get my head on straight and post my review ASAP)

The disastrous Queen of Tarts

PS. My computer HATES me I think. That fuzz in some of the recording is from my dying laptop. *sigh* 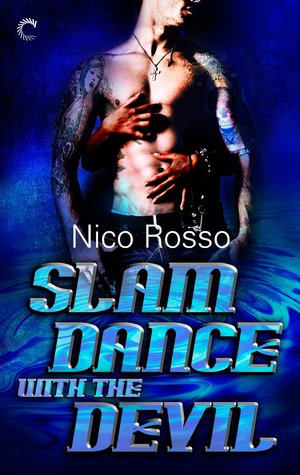 Slam Dance With The Devil

All those wild rock stars you hear about? Some of them really are demons, sustained by the energy pouring off the audience…

Wild, destructive and immortal, rocker Kent Gaol has given up the search for his Muse—a demon’s one true source of inspiration, his forever partner. After losing the one woman he thought might be his, he’s convinced she doesn’t exist.

Hard-as-nails private investigator Nona Harris has been hired by a mysterious client to track Kent. She knows nothing of his truths, until one night when Kent tricks her on stage during one of his concerts. Amazingly, she not only senses the energy around the demons, she feeds from it…and it turns her on.

Kent never expected Nona’s response to be so intense, nor that she could enter his world and so thoroughly rock it. This is beyond a tumultuous love affair—this is a sexual and emotional bond that will change them both forever. A bond strong enough that now Nona’s shady client wants them both dead…

♥ Buy this ebook from: Carina Press| Amazon | Barnes & Noble | ARe

Nico Rosso was a writer in search of a genre until his wife, Zoe Archer, brought romance into his life in more ways than one. Through her he learned the romance genre was filled with vast opportunities for storytelling. He created the sci-fi romance Limit War series, sweeping readers off Earth to an interstellar conflict. Closer to home, he set off the apocalypse with The Last Night. And starting with the Ether Chronicles, he gets to write closer than ever with his wife. They created the steampunk world together and trade off, telling the romance tales that span the globe. You can find him on the web at www.nicorosso.com

What: I’m giving away a nook or kindle copy of

Slam Dance With The Devil

Cause I loved it 🙂

Who: a lucky commenter

How: Use the rafflecopter and leave us a comment telling us…

What musician from the past would you like to see in concert?

or James “The Devil” Deacon

2 Replies to “Google Giggle Hangout with Nico Rosso + Spotlight on Slam Dance With The Devil + Contest!”