*Snoopy Dance* Yay!!! I am so ecstatic to welcome Aaron back to The Book Tart! We met a few years ago and I love his storytelling, dark, sardonic and shot though with hope. I savored his newest young adult novel Long Live The Suicide King and I’m looking forward to the next story he chooses to tell. I hope you grab a donut and settle in for our chat and then go get his books! 😀

The disastrous Queen of Tarts

PS. I vlog reviewed my lovin’ of Aaron’s book- Click HERE for my review of Long Live The Suicide King. 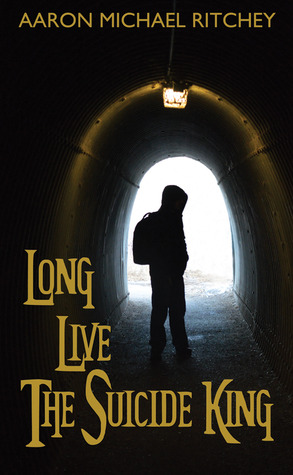 Aaron Michael Ritchey (Author)
Published: April 3rd 2014 |
ISBN: 9780985564384 |
Published by : Courtney Literary |
Format: Print and ebookSeventeen-year-old Jim JD Dillinger knows exactly how his miserable suburban life is going to play out. At least drugs added a little chaos to his life, but after almost losing his soul, JD knows he has to quit. Now clean, he figures he has another sixty years of plain old boring life followed by a nasty death. JD decides to pre-empt God by killing himself. However, once he decides to die, his life gets better, more interesting, and then downright strange. New friends. Possible romance. And donuts. Lots of donuts. Once the end is in sight, every minute becomes precious.

Aaron Michael Ritchey was born with Colorado thunderstorms in his soul. He’s sought shelter as a world traveler, an endurance athlete, a story addict, and even gave serious thought to becoming a Roman Catholic priest. After too brief a time in Paris, he moved back to the American West and lives semi-comfortably with three forces of nature: a little, blonde hurricane, an artistic tornado, and a beautiful, beautiful blizzard.